The warm weather has kept me away from the computer until later on in the day and then it is such a rush to get everything done before bedtime that I have been overlooking several things. Right now I am s upposed to be packing to visit my mum and dad for the weekend buit thought I would just do this before the day gets going. My parents live over two hundred miles away, most of it down windy, hilly lanes that take an age to navigate but they are worth it and at 87 and 90 years old, they are parents to be proud of. They are both very supportive of my writing and proudly boast to all their friends about their daughter -the novelist. so they will be even more proud when they read the lovely review written by Lisa Yarde of The Historical Novels Review. http://historicalnovelreview.blogspot.com I am really touched by her kind words and will do my best to direct as much traffic to her site as possible in way of thanks. they are alsooffering a free copy of Peaceweaver to the person who leaves the best review, so far there is only one so get in while the going is good!

The Forest Dwellers is undergoing final edits and work is being done on teh cover. I posted some photographs taken for the cover on my facebook page, http://www.facebook.com/#!/pages/The-Forest-Dwellers-by-Judith-Arnopp/124828370880823?ref=ts the model is absolutely stunning :D (for those who don't know, it is my eighteen year old daughter, Laura, possibly the most gorgeous woman ever to grace this earth.) Also coming soon is a collection of work by my writing group. WE have worked hard on it for almost a year now and it contains a nice eclectic mix of genres and opinions. It is called Of Cakes and Words and will be published by Cledlyn Publications, available by the end of the summer 2010.

While The Forest Dwellers is out of my hands i have begun research for my next novel, The Song of Heledd which is based on an 9th Centruy Welsh poem and set in teh 7th Century. The poems are fragments of an old tale of the Dogfeilng, a slaughtered dynasty from the Welsh borders. The only survivor is Heledd, the daughter of King Cyndrwn and sister of Cynddylan the Fair. I have been enthralled in the history for several months now and as I sink deeper into the Heledd's lost world the story in my head grows stronger and clearer. I can barely wait to get it on paper.

have a great weekend everybody
Posted by Judith Arnopp at 02:01 2 comments: 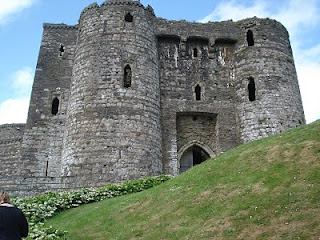 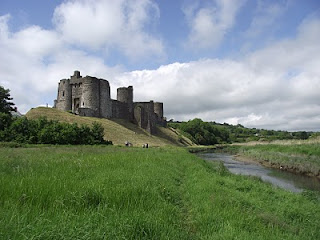 Sunday I went to Kidwelly Castle. I have been before but not for a number of years. It was just as good as I remembered.

The castle forms part of a defence system with Laugharne and Llansteffan. The first structure was begun in 1106, a wooden pallisade on an earthen mound. The stone curtain wall and replaced the wooden defenses in the early 13th century and by the end of the century the Chaworth family had built the massive towers and the inner ward complete with hall range, kitchen and chapel tower. The chapel protrudes beyond the curtain wall toward the river and the sacristry still sports a fine cruciform roof.
By the mid 1300's it had fallen under the control of the duchy of Lancaster and John of Gaunt rebuilt the great south gate. In 1403 Owain Glyndwr attacked but although the town fell the castle was not taken. massive gatehouse, completed around1422 was fully independent of the rest of the stronghold and easily defended. When I was there small children were eagerly peering through the murder holes and imagining raining missiles on the enemy below. It is a bloodthirsty child's paradise.

The castle is remarkably intact and there are narrow twisting corridors and towers to explore. The original grandeur of the building is still easily discernible, and many fine mouldings and fireplaces remain. In several rooms the wall plaster is still clearly seen and the whole castle reeks of history; the people who once lived and worked there still echo in the dark corners.
We spent alot of time looking at the evidence of alterations to the building and realise that for much of the castles active life it would have resembled a building site. Different types of stone at the top of walls that have been heightened adn doorways and windows blocked up.
The views from the towers stretch to the sea and 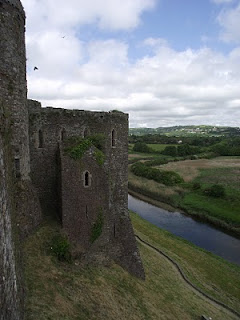 beyond and to the east lies Gwenllian's Field. Gwenllian was a Welsh Warrior Princess from the 12th century princess of Gwynedd who lost her battle against the Normans at Kidwelly and was executed on the field after the defeat of her army. If you would like to read more about Gwenllian then I recommend Memories of the Curlew by Helen Spring isbn: 9781849234900. I also recommend that you pay a visit.
Kidwelly lies just south of Carmarthen.

Posted by Judith Arnopp at 05:37 No comments:

I have just spent a day comforting a friend of mine who received a scathing review of her very tidy novel. I can only put the reviewers comments down to prejudice. One of the most disappointing aspects I have discovered about the book world is the snobbery. Writers sneer at authors of other genres and even those within their own. I used to believe that, as writing requires some degree of intelligence, I would find the literary world inhabited by the open minded and that encouragement would be strong but I was quite wrong.

I have friends from all genres, I know they work just as hard as I at presenting their work in the best possible way and I respect that. It isn't a doddle to write a romance, it isn't a cop out to write a fantasy; it takes just as many hours of self denial, solitary confinement and every bit as much hair ripping and despair.

If the writing is in a style not favoured by a particular reviewer, it does not make the book 'crap.' If the writing flows, is pleasant to read and the story can hold the attention and please enough readers then the book is worth publishing, whether it be via the mainstream or the self publishing route. One opinion is just that, one unimportant opinion.

Of course new writers will make errors, all writing is a learning curve no matter what giddy heights the author has achieved. It does not help emerging talent to have reviewers (who are often misinformed) make slating comments. A harsh review can make or break a debut novelist. I am not suggesting that we should be 100% congratulatory but whereas constructive criticism is always positve, slating can only do harm.

It is only a dream to hope that all writers will one day unite to support and encourage their fellows and perhaps forgive mistakes that they may someday make themselves. We all make errors, William Shakespeare's historical plays are peppered with inaccuracies and prejudices but nobody ever suggested he should give up. It is fiction we are writing after all. There are no 'truths' in history, only opinions.

I advise all writers that if you love to write, have to write then do it for yourself and ignore the critics who are often frustrated authors themselves. Believe that your book is good; your words will be enjoyed by somebody somewhere so stop feeling sorry for yourself, show those negative critics a thing or two and GO FOR IT!
Posted by Judith Arnopp at 01:02 No comments: