If you've missed Karen Aminadra as much as I have you will be delighted to hear she is back. I am thrilled to have her on my blog this morning to tell us what she has been doing, and thankfully, it seems she has been writing. Go ahead, Karen, tell us all about it. 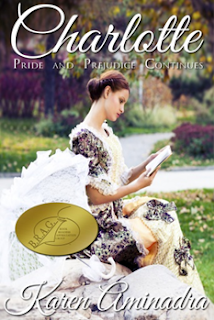 In 2012 I wrote my first book, Charlotte, the first in my Pride & Prejudice Continues Series. After Charlotte, came Rosings, and then my latest, Wickham.

Wickham was such a challenge to write. George Wickham is not your run-of-the-mill Jane Austen character, is he? He’s a rogue. And, love him or hate him, he was my next target along with his rather silly wife, Lydia. I toyed many times with reforming him, I toyed with straightening Lydia out and forcing my will as the author upon them, but characters like Wickham and Lydia have a will all of their own.  Add into the mix the fact that George Wickham is a Lieutenant in the British Army during the time of the Napoléonic Wars and you have all the ingredients for some explosive story-telling. 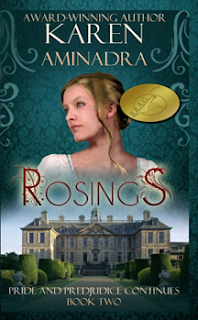 Here is a little taster to whet your appetites…

Lieutenant George Wickham shivered. He was freezing sitting on the damp grass, but that discomfort was nothing compared to the pain in his wrists where the cold, hard iron from the manacles dug into his flesh. He tried to shift position to ease his pain, but with every movement, some other part of his body hurt. Sighing he gave up. He lolled his head back against the stake in the ground he was chained to. It serves me right. I do not deserve comfort.
A shuffling on the ground behind him and the touch of a gentle hand against his, reminded him sharply of his beautiful companion. It was entirely his fault that she now found herself chained and shackled beside him. Whatever her fate was to be—whether free or imprisoned, alive or dead, it was all his doing.
He closed his eyes and wished to God that he had been a steadier man, not prone to the whims of fancy. He wished he could think straight when his heart fluttered at the sight of womanly beauty; yet, he was no such man. He was a libertine and a blackguard, and his insatiable desires were the reason he found himself in his current predicament.
His thoughts returned to six months ago, to England, to where this whole regretful misadventure began…

Wickham is the third in the series. You can check out the others on my website www.karenaminadra.com or through Amazon. Here 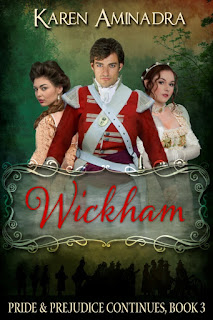 Wickham believes life is cruel to him until he comes face-to-face with an irresistible pair of dark brown glinting eyes and falls in love.
He is bored with his lot in life. His wife, Lydia, drives him as mad as a hornet’s nest, and he does not give her the attention and respect she demands.
They both yearn for change.
When Wickham leaves England to fight against Napoléon’s army in France, they both get their chance.
However, what they want is dangerous, foolhardy, and could wind up killing Wickham and ruining Lydia’s reputation forever.
Lydia’s wicked neglect of their infant son in favour of her own desires and need for attention could lead her into very hot water.
Wickham’s desire for the Frenchwoman he yearns for could be his complete undoing.
Posted by Judith Arnopp at 01:28 4 comments: