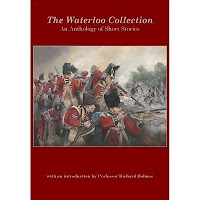 In June 1815 The Battle of Waterloo brought to an end almost twenty-three years of European conflict. Of the four battles that made up this campaign Waterloo is the most famous and has become iconic with the Anglo/French wars. It was Napoleon’s first personal defeat marking the end of his bid for power.

The battle took place just south of the town of Waterloo on the ridge of Mont St Jean, in and around three farms, Hougoumont, La Haye Sainte and Papelotte. It was a hard fought, bloody battle that resulted in massive casualties on both sides.

Hougoumont Farm was placed under the charge of Lieutenant-Colonel Macdonell. Wellington’s instructions being that he should "defend the post to the last extremity." Macdonell certainly followed this command and repelled the French assault for an exhausting nine hours.

During the maelstrom the main building was destroyed, as was the tower, cowshed, coach house and stables. Otherwise, the farm remains intact However, almost two hundred years of neglect have taken their toll and the buildings are now very much dilapidated. The walls of the great barn are bulging and despite recent attempts at repair, the farm is vulnerable to vandalism and the detrimental effects of the weather.

In recent years historians and conservationists have banded together to form The Hougoumont Project to raise funds for the farm’s restoration. Professor Richard Holmes is chairman of the project. He says ‘My own visits to Hougoumont left me increasingly worried about its condition, and a number of other visitors – from professional battlefield guides to enthusiastic amateurs – wrote, telephoned, or emailed to suggest that something should to be done as a matter of urgency. A small group of us met (fittingly enough in a Berkshire pub), and Project Hougoumont was formally launched in June 2008.’

The project intends to sympathetically restore the existing buildings, and develop the wider site providing educational facilities and enabling living history events to be held. The chapel has been restored and some of the breaches in the walls repaired but there still remains much to do. Professor Holmes goes on to say, “In my long experience of historical battlefields, few spots have the haunting appeal of the farm complex of Hougoumont on the field of Waterloo. In seeking to preserve this iconic spot we do not simply remember the British troops who held it. We also applaud the courage of the German infantry who fought for the wood in front of it, of the brave Frenchmen who came so close to taking it and turning the fortune of the day, and of the cavalry whose charges swirled up and down the slopes within sight of its ancient walls, now in such acute peril.’

Several fund raising schemes are being set up by The Hougoumont Project to coincide with the forthcoming bicentenary celebrations in 2015. One of these schemes is an anthology of short stories set in and around the battle.

This book, The Waterloo Collection – an anthology of short stories is available for pre-order on Amazon, priced £11.99 with proceeds going to this worthy cause. (Yes, some of mine are in it.) Professor Holmes, who has written the foreword, has kindly agreed to sign copies at Bookstop during the Tavistock Music and Arts Festival on April 23rd 2011. We hope to see you there.

Also available are some brilliant art prints by renowned military artists who are very generously donating 25% of sales to the Hougoumont Project. You can find details on the website http://www.waterloo-collection.com/index.html
Posted by Judith Arnopp at 07:31 1 comment:

The Cwrtnewydd Scribblers writing group, of whom I am a proud member, have launched a short story competition.
It has been a long hard winter in the UK this year and summer still seems a long way off so, to bring the warm weather a little closer, the theme of the competition is to be Summer Sun, Summer Fun. Your story can be in the genre of your choice (but keep it clean please). The winner will receive £40, the second prize is £20 and the runner up will win £10. All winning entries will be offered inclusion in The Cwrtnewydd Scribblers’ Annual Anthology due to be published in time for Christmas.


For further details and rules of entry please see our website: http://www.cwrtnnewyddscribblers.webs.com/
Posted by Judith Arnopp at 08:23 No comments: