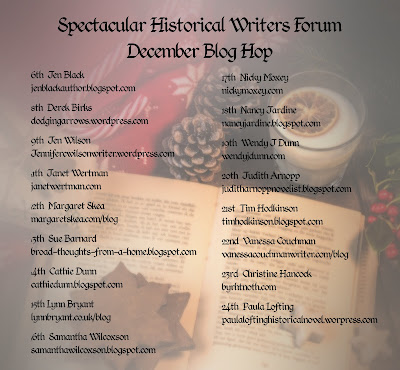 If we were to travel back in time to any Christmas during the Tudor period, we’d recognise a few of the traditions but there were others that would certainly surprise us. Religion of course played a huge part in all aspects of Tudor life and at Christmas time fasting and mass took precedence over gift-giving and carousing.
Christmas was a time of prayer and feast; the spinning wheel which occupied a corner of most homes, sat idle until the first Monday after epiphany (Plough Monday) when work would be resumed. While we adorn a tree, they decorated the spinning wheel with evergreen boughs, holly and ivy, a remnant of a ritual from pagan times.

Another tradition that preceded Christianity was the Wassail in which a wooden bowl containing hot ale, spiced apple, sugar and other spices, was carried from door-to-door. Neighbours were invited to drink in exchange for a coin. For the more formal Wassail held at court, a bowl was passed around by royal stewards, the king being served last.

So now is come our joyful'st feast,
Let every man be jolly.
Each room with ivy leaves is drest,
And every post with holly.
Though some churls at our mirth repine,
Round your foreheads garlands twine,
Drown sorrow in a cup of wine,
And let us all be merry.
George Wither (1588-1667)

The yule log, a huge trunk or bundle of faggots (depending on the size of one’s hearth) was brought in from the forest. It was burned for the entire twelve days of the Christmas celebration, and it was considered lucky to keep charred remnants to start off next year’s yule fire. Aspects of this tradition are still in use today, although our log tends to consist of cake and chocolate and icing sugar.

As part of the festivities in royal houses, a boy or a fool would be ‘crowned’ the Lord of Misrule. Under his command normal order was overturned and the fool became king, and vice versa.
For the entertainment of the court, the Lord of Misrule could command anybody to do anything. It was a time of total chaos and one that escapes my usually fertile imagination, for I cannot imagine Henry VIII allowing anyone to make a public mockery of him, let alone a fool … but apparently, he did.

In Survey of London, published in the first year of James I rule, John Stow says:
In the feaste of Christmas, there was in the kinges house, wheresoeuer hee was lodged, a Lord of Misrule, or Maister of merry disports, and the like had yee in the house of euery noble man, of honor, or good worshippe, were he spirituall or temporall. Amongst the which the Mayor of London, and eyther of the shiriffes had their seuerall Lordes of Misrule, euer contending without quarrell or offence, who should make the rarest pastimes to delight the Beholders.

In 1525 Henry VIII appointed not only a Lord of Misrule for his own household but also one for Princess Mary’s – the ensuing chaos must have been considerable and we know from records that things often got out of hand. There was even an ecclesiastic version of misrule when boy bishops were elected, often known as ‘Fool Bishop’ or ‘Fool Abbot’. John Southworth says in his book Fools and Jesters at the English Court: 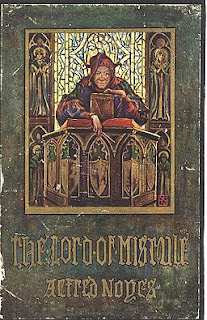 ‘What followed over the next few days is commonly described as burlesque, a turning upside down of the normal liturgy; it is more accurately seen and understood as the literal acting out of the Magnificat, in which the ‘nobodies’ among the clergy, as represented by the fool and his assistants, were exulted as a salutary foretaste and prophetic anticipation of the Last Judgement.’ (Southworth: p.70)
By Elizabeth’s reign, presumably having run out of ideas for inventive mischief, the practice had almost died out.

All this unbridled excitement clearly gave the Tudors an appetite, for the Christmas menu seems more outrageous (to us) than their behaviour.

Poorer folk feasted on umble pie – pastry filled with the chopped and minced heart, liver, lungs and kidneys of a deer, but the affluent gorged on richer fare. Along with the traditional Christmas dishes of swan, peacock and dolphin (yes, I know) Henry VIII was the first monarch to introduce turkey to the royal table, but there were other … stranger things.

Christmas pie – sounds yummy – was rather like a Russian doll but with poultry, and consisted of a turkey stuffed with a goose, stuffed with a chicken, stuffed with a partridge, stuffed with a pigeon. This pie was served in a pastry case, surrounded by joints of hare, small game and wild fowl. May not be as yummy as it sounds then – I think I will be sticking with my nut roast this year.

And if that sounds weird, Cockenthrice was weirder still. Most of us have seen the grotesques in the margins of medieval manuscripts, strange half-beasts comprised of different animals – a rabbit with a man’s head or a lion with a dragon’s head, or a snail with the head of a cat. Well, it didn’t stop at the drawing stage. The Tudor table benefitted from dishes that were constructed in a similar inventive manner. Cockenthrice was comprised of a sucking pig, sewn to the back end of a goose (or something similar) – there are some gruesome pictures on-line - google it, I dare you!

Mince (or minst) pies might sound familiar but these were not made by Mr Kipling (other pies are available) and consisted largely of prunes, raisins, dates, powdered beef, butter, egg yolk, flour, suet or marrow, and minced mutton and seasoned with salt, pepper and saffron – these thirteen ingredients represented Christ and the apostles, all baked in a pie crust shaped like a manger to symbolise the holy birth.

Like the Christmases of today, everyone celebrated differently. Our Christmas has merged with winter celebrations of other religions, and new ideas and traditions have evolved but the Tudor Christmas is still detectable. While the Tudors brought in greenery to decorate their homes, modern homes are largely in tinsel and plastic and lights that can be seen from space. Tudors fasted until Christmas day, Christmas Eve being especially strict with no meat, cheese or eggs. This meant that come Christmas Day everyone was ready to gorge themselves and records show that royal households consumed as many as twenty four courses! Although we don’t tend to go that far today, lots of us diet desperately to fit into a little black dress and then blow it all by over eating on the big day!

Now, as it was then, Christmas remains a time to be spent with family and friends, and however you spend yours, traditional or otherwise, celebrating with loved ones or working, make sure it is a good one, and after you’ve toasted the queen, don’t forget to raise a glass to the Tudors.

All of Judith Arnopp's books are available in Paperback, Kindle and some are on Audible. For more information click here: author.to/juditharnoppbooks

The Heretic Wind: the story of Mary Tudor, Queen of England is available for Pre-order NOW! mybook.to/thw 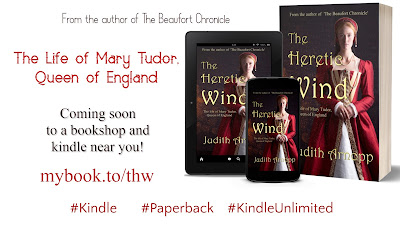 Tomorrow is Tim Hodkinson's turn - click here to go to his blog. http://timhodkinson.blogspot.com/
Posted by Judith Arnopp at 02:11 No comments: