Do you remember the first day you took your child to school? you dressed him in his new uniform, tied his tie for him, made sure he had his plimsoles in his slipper bag. Then you held his hand all the way to the classroom, helped him find the coat peg with his name beneath it. And then you left him and went home alone, painfully aware that you had launched your boy into the wicked world and it was up to him whether he sank of swam? Do you recall your grief at the lost babyhood?

that is how i feel about Peaceweaver. Up until now it has been mine to play with, i could add/subtract commas, delete paragraphs, change the title but now it is mine no longer. it is out there alone in a world of unkind critics. i dont know if it will sink without a trace or bounce triumphantly to the bestseller lists.
Posted by Judith Arnopp at 00:40 No comments: 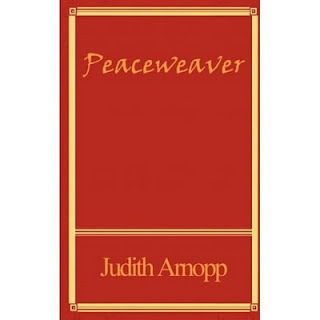 It is all systems go now that Peaceweaver is available to order on Amazon. soon it should be available on other book seller sites and bookshops too. I am currently getting ready for my first book fair on Saturday, making leaflets, bookmarks and posters. My friends on Facebook, Youwriteon.com, authonomy.co.uk etc, have already been blasted by my messages and emails and there is great excitement here at home. My family are already making lists of what they want when I hit the best seller lists :D
I should be over the 'stagefright' by now but I am still so anxious that people will hate it and slate it. Historical novels are a very specific genre, people either love them or hate them and the genre itself varies so. Some are blood thirsty and very political, some are gushy, lovey dovely romances and some are rip roaring adventures. Peaceweaver, I think, covers all those aspects at some point. I'm not sure if that is a good or a bad thing. But, if everyone buys a copy and then recommends me to their friends I should do alright.
Posted by Judith Arnopp at 04:50 No comments:

I've got the contract!

It all seems suddenly very real now. The publishing contract came today and I've spent the morning carefully reading it, forcing my eyes not to glaze over and trying not to let my mind wander. My instinct is to just sign the flipping thing and speed up the next part of the process but I can hear my mother's voice telling me to read the small print.

I can scarcely believe it and am still not entirely convinced that something still won't go wrong. Things like this don't happen to me. I have always written; poems, stories when I was a child and steamy romances when I was a teenager. When I was at university I loved writing essays, the research was a source of joy and the construcion of the final essay, the longer the better, gave me a real sense of satisfaction. It was just a small step to progress to my first novel. Friends and family raised eyebrows but to me it was a perfectly natural thing to do. My first two attempts leave a lot to be desired but almost as soon as I began to write Peaceweaver, I felt a sense of 'rightness'. It is as if she (EAdgyth)spoke to me and the story developed beneath her guidance. But that is just me being fanciful, writers are like that :D

My next novel is set in the new forest just after the norman conquest and tells the story of a community evicted from their homes to make way for the King's new hunting grounds. The adventure begins with an attempted rape, progresses through murder and exile and culminates in regicide. I hope I can do justice to the story of Aelf's family.
Posted by Judith Arnopp at 06:52 No comments:

This week I had the confirmation that Peacweaver will be published by Christmas. I am excited and terrified all at once. Although I have always written, the last few years have been a steep learning curve. I have learned to rein myself in, cut out alot of the frilly bits and emerge myself in the character rather than use my novels as a canvas for my poetic tendencies. When I re-read my first two attempts at full length novels I can see how sadly lacking they are. I was too heavily influenced by classic novelists who, as great as they are, are now outdated. I think now I have learned to let my 'self ' colour the page and write instinctively rather than consciously trying to be something I am not. Now, with Peaceweaver ready to hit the presses, I find I have to learn a whole new skill. I have to market the flipping thing!

I am a writer not a business woman and have not the slightest confidence that I can promote my book properly. My inclination is to say, 'Well, I've written this book, you probably won't like it but it would be nice if you'd read it.' That won't work will it? So I have to practice extreme confidence and convince the world that my novels are worth reading. I will be shortly running a competition on Face book -Peaceweaver by Judith Arnopp- when I have a hundred members I will post a question and the winner will receive a signed copy of Peaceweaver. I hope to see you all there. you can reach the page by clicking the facebook tab on the top left of the page ... I think.
Posted by Judith Arnopp at 01:13 No comments: