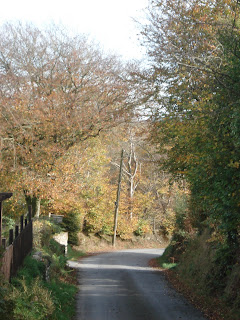 On thursday my pc died and I have been without it until today. Luckily it was only a little death and the wonderful man at the repair shop, Teifi Computers in Lampeter, fixed it as quickly as he could. Nevertheless I spent the whole weekend worrying about my three novels, umpteen poems and short stories that are stored on my hard drive. Even though I have back up copies, they are somehow not the same as the ones on my pc.

Totally at a loose end without my machine, I tried to enjoy using my notebook but it is just not comfortable, the keyboard is too small and I make too many errors, lose my flow. I was not a happy bunny, I even resorted to pen and paper at one stage. I wonder what I did before I had a computer, how did I spend the day and those interminable evenings? I cannot imagine life now without the separate existence that I live in my head, a life that is peopled with characters of my own imagining. When I am about my usual chores, I find myself thinking about them and what I will have them do next. Their presence takes the slog out of the worst jobs and I often find the bathroom has cleaned itself while I have been considering the motivation for thier actions. Often I am struck with some wonderful new idea and have to leave the washing up and get my ideas down before they trickle away. The washing up is always still there when I drag myself away from my desk.

Writers are lucky, it may be a lonely occupation in terms of human company but the people we dream up are often just as good company. I have been taking walks, not long walks that involve proper boots or socks, just strolls around the neighbourhood. The things I see along the way often find a way into my chapters, little details of everyday life that are timeless, like the fall of the shadow upon a sunny bank or the sound of the stream as it clatters over rocks.
Posted by Judith Arnopp at 02:02 1 comment:

I thought I'd talk about my novel, Peaceweaver, today as it should, fingers crossed be available to order soon.

It is the story of Eadgyth Aelfgarsdottir, the daughter of Aelfgar, the Earl of Mercia and grandaughter of Lady Godiva (Godgifu) of legend. Her status as the daughter of an earldorman was more of a curse than a blessing. Married at thirteen to her father's former enemy, the king of the Welsh, Gruffydd ap Llewelyn, she finds herself queen in a strange land. Although unhappy at the choices made for her, Eadgyth sticks out her chin and makes the best of a bad hand. Surrounded by war, she finds friendship and love and delights in the birth of each of her children. The harshness of 11th century life and the expectations placed upon her, injure but do not swamp her. The misery she endures at the hands of her husband are made bearable by her friends and children. However, when the castle is attacked and Eadgyth is separated from the household, a new epoch in her life is opened.

She is taken to the court of the Saxon king, Edward the Confessor, and there she uses all her feminine whiles to infiltrate the Godwinson family and be reunited with her children. Widowed and penniless, her status negligible, she catches the eye of the most powerful Godwin of all, Harold, Earl of Wessex. An unorthodox and stormy courtship follows until, at last, she agrees to become his wife.

The years leading up to 1066 are not minutely documented. This provides great scope for the novelist and I have enjoyed pushing my characters around, discovering how they may have behaved. A woman in a man's world, I have tried to illustrate the joys and horrors of the days that Eadgyth's life encompassed. During the last years of the Anglo Saxon regime and the early days of the Norman occupation she moved among kings and princes, the dissillusioned and the desperate; her status fluctuating with the changing forutnes of Britian. I hope that my readers will share Eadgyth's small joys and, when she ultimately overcomes her greatest sorrow to clutch at personal happiness, will be glad.

Peaceweaver will be available for order soon. Further information will be posted when the time comes.
Posted by Judith Arnopp at 01:26 1 comment:

The plight of women

The plight of women in history is something that I wonder about ...alot. History is full of the exploits of men, by reading between the lines of the chroniclers we can glean information about thier battles, thier politics, thier private lives but when it comes to women, the page is silent.

There are some queens and noblewomen who have managed to speak to us down the years but they are few and far between and those were women who were out of the ordinary. We know that women like Eleanor of Aquitaine went on crusades and that Joan of Arc was a heroine for a while; Eleanor was imprisoned for sixteen years by her husband Henry ii and we all know what became of poor old Joan. In stepping outside the boundaries of thier prescribed role they brought down the wrath and disapproval of the male faction. And these were the wo men we regard as successful in asserting thier human rights. Others were far less fortunate.

In my novels I try to imagine how it must have felt to be so constrained. Not allowed to speak as they saw fit, not able to marry where they wished, denied a proper education and beaten (although, to be fair, only with a rod no thicker than a thumb). Historically women have been solely regarded as an ornament to enhance their husband's status. Christian writers like St Paul and Jeronme, denigrated women as tools of the devil; they portrayed deceit and sexual incontinence as being inherent to the fairer sex. They warned men against women and bade them keep thier wives undercontrol for they were incapable of denying thier own nature. Monks did not like sex, they approved of marriage only as a means of procreating without recourse to sin.

This warped idea of women filtered into literature; the ideal woman becoming one who was entirely cowed by the authority of her husband or father. the meek woman became every man's ideal. So many men must have been disappointed for I cannot believe that women were truly so pliable, I am sure they sought other means of getting what they wanted. For many hundreds of years literature concerning women was written by men, for men to read. They may have been constrained to do things against thier will but I am convinced they would have not done so quietly; it isn't in our nature.

The women in my novels, although pressured by the unnatural constraints placed upon them, are not cowed. They plot and scheme for themselves and fight for a middle ground. They don't always win but, without altering the historical record too drastically, I usually try to make sure that they at least get a fair bite at the cherry.
Posted by Judith Arnopp at 04:44 No comments:

The Writing Group - a haiku

The Writing Group - A haiku

by Jude
Posted by Judith Arnopp at 04:43 No comments:

In my novel Peaceweaver I describe the rain as 'billowing in sheets' across the Welsh hillside. A critic questioned this, 'rain doesn't billow in sheets' she said. Well, it does here.

I can stand in my garden and watch it coming along the valley, billowing and turning like a flock of autumn starlings. Sometimes I try to pinpoint the moment it actually reaches me but the closer it comes the more difficult it is to see; the only reason I know it has arrives is because I am suddenly very, very wet.

We get a lot of rain in Wales and, as a result, it is predominant in my writing. It is just as well that my work is set in Britian. In search of inspiration I look from my study window and whatever type of rain we are enjoying at that moment finds an eternal place in my story. so depending on the day outside my characters enjoy, soft, light rain, a low slung mist, billowing sheets or stair rods.

There are people who hate the rain but I like it. It provides me with the excuse I am looking for to stay indoors at my computer and get on with that next chapter.
Posted by Judith Arnopp at 00:11 No comments:

I'm told that I need to blog, so here I am, blogging. What to blog about, I don't know; I suppose I should begin with an introduction.
Most of my time is spent at my PC, writing fabulous novels. I live with my husband and several of my grown up children, on a smallholding in West Wales. Now, the family have grown up I can devote my time to writing. As a child I wrote poems and stories, as a teenager I dreamed up torrid romances and now, as an adult, I write Historical novels.
After studying English literature and History at university of Wales, Lampeter I realised how Anglo Saxon and medieval women have been omitted from the historical record; even women whose influence has been considerable. It is these wronged women that appear in my novels, whether they be wives and mothers, nuns or prostitutes, queens or commoners.

Peaceweaver is the story of Eadgyth Aelfgarsdottir, the queen of both Gruffydd ap Llewellyn of Wales and Harold II of England. She tells a tale of war and passion and provides a voice for women tossed in the tumultous sea of feuding Anglo Saxon Britain.
This blog will relate the tale of my journey from an unknown into a published author.
Posted by Judith Arnopp at 11:38 2 comments: