Review of The Bones of Avalon - Phil Rickman 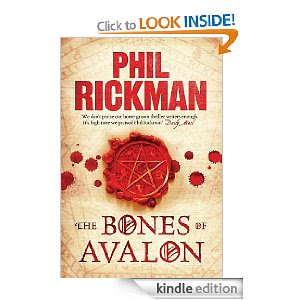 I had never heard of Phil Rickman before I stumbled, quite accidentally, upon this book. As a writer and historian myself, I am a harsh critic and have grown weary of predictable, run of the mill historical novels. Most are unconvincing both in characterisation and plot and when I picked up The Bones of Avalon I did not expect it to be any different. But I was wrong; Phil had me at the first line.

The Bones of Avalon is set in the 1560’s; a time of religious uncertainty, Popish plot and counterplot. The people walk in fear, trusting no-one in an England still reeling from the heretical burnings and hangings of Mary Tudor’s Catholic reign. Now, she is dead and another Tudor takes the throne. Another queen, the bastard daughter of Anne Boleyn – Elizabeth.

Haunted by her mother’s death, uncertain if she will succeed or fail, the young Elizabeth allows herself to trust few men. Two of whom are Robert Dudley – mistrusted by the council, a wild card adventurer and rumoured to be the queen’s lover; and her consultant and astrologer, Dr Dee, a mild mannered scholar and dreamer.

They are sent to Glastonbury to discover the missing bones of King Arthur, lost during the dissolution in Henry VIII’s reign, so that Elizabeth might fulfil a prophecy. Without its abbey Glastonbury is desolate, the town decaying and as soon as Dudley and Dr Dee set foot there, mystery and superstition unfolds.

By the time I reached the end of the first chapter I knew I was in good hands. Mr Rickman’s first person narrative is authentic enough to make me forget I was actually reading. His characters are well-drawn properly thought out. The fumbling investigative powers of Dr Dee endears him to the reader and the primitive, wary people of Glastonbury instil the plot with ambiguity. It was delightfully refreshing to find Robert Dudley illustrated, not as a broad shouldered, devil-may-care, wife killing braggart, but as an ordinary man, torn, confused, afflicted with sickness and, throughout it all, a stalwart friend to Dr Dee and loyal to his queen.

The author’s knowledge of the period is indisputable, his understanding of 16th century uncertainty is flawless but, for me, the best thing about this book has to be the atmosphere.

I am not a believer in the supernatural but Mr Rickman had me doubting my own sound good sense. He gave me goose bumps such as I have not experienced since childhood. An undercurrent of human evil runs through this book, illustrating mankind’s capacity to destroy that which they don’t understand as an evil far stronger than the supernatural. Although the author never infers that supernatural power truly exists, The Bones of Avalon is unsettling; it has you looking over your shoulder. It is a book to read with the doors and windows locked.

Phil Rickman has written an intelligent book. Some may find the length off putting, it certainly isn’t for lightweight readers but, if you have the ability to let go of disbelief and embrace the mindset of the late 16th century, then you will love it as much as I. A whopping five stars – brilliant.