The Chainmakers by Helen Spring - A Review by Judith Arnopp 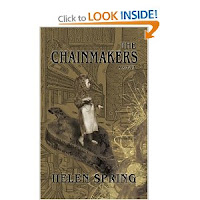 If you want to be totally absorbed into the past, experience the joys, sorrows and hardships of the late 19th - early 20th century then this is the book for you. I bought the kindle edition on Thursday lunchtime and completely lost the next 24 hours while I read it.
The Chainmakers is an experience rather than just a 'read', you follow Anna on her life journey, from childhood, through the pangs of first love, through marriage and childbirth to late middle age. Her story takes you across the Atlantic from England to New York and shows you the difficulties that ordinary, law abiding people suffered, both in the manufacturing towns of the UK and under prohibition and mob law in the U.S.A.
Ms Spring's competent narrative sweeps the reader effortlessly from the filth of the 19th century factory floor to the elegant drawing rooms of New York. Her characters sing, the settings are masterfully drawn and the plot intriging. I can not imagine why this is not on the best seller list. Very highly recommended.
Posted by Judith Arnopp at 05:23 No comments:

The Crimson Petal and the White by Michel Faber : A Review by Judith Arnopp

Don’t read this book if you are offended by disagreeable truths. It contains explicit, unpleasant sexual content and is not for the faint hearted. It is a stark view of Victorian London– a stark-naked view that is very different to the image that Victorian London wished to project. The author rips away the pretty drapes and shows us, not just the legs of the table but the filth that lies hidden beneath.
The narrator takes the reader by the hand and leads you through dark alleyways to the places where only the destitute or the criminal live. Here you become so involved in the lives of the people you meet that you will be implicit in the crimes witnessed.
This is not a pretty story of simpering Victorian girls who lift their petticoats for a penny; it is an honest, unflinching, often brutal perspective of the darker side of human nature. As others have said before me, Faber takes his reader to the places that Dickens and Wilkie Collins could only hint at.
Every character is superbly drawn, warts and all, twisted, tortured, selfish and very, uncomfortably human. You will meet rich punters and the poorest of working girls and they are so convincing that you might think you have met them somewhere before.
Sugar is not a stereotypical tart with a heart, she is an enigma, from her curious skin condition to her traumatised mind. One minute you will think she loves William, the next that she despises him and this keeps the reader hanging, on the edge of his seat, wondering what jaw dropping surprise she will reveal next.
Is she a champion of women or an anti-heroine? As a prostitute she is an object for the use of all men but she only really loses control of her own destiny when she ties herself to just one man – William Rackham; then her choices are taken out of her hands.
Sugar takes all her frustration and contempt for men and pours it into a hastily scrawled novel that is so overflowing with hatred, disgust and perversion that she knows she can never allow the world to see it, for they wouldn’t care to look.
Whether you want to or not, when reading this novel you will require all your senses. You will smell the shit, feel the cold; taste the hunger, hear the weeping of the destitute and scream with them, frustrated by the ignorance.
You will share the degradation that women like Sugar were subjected to and try as you might you will not be able to comprehend why so many prostitutes clung to their way of life. It is not possible for us to understand why they considered work in the factories to be so much worse. The choice was between a fast, gay life of sin and an early grave, or a life of drudgery and hunger that would end just as prematurely. For some women, things are not so different today.
Victorian London tried to conceal its darker nature beneath a façade of respectability just as Agnes Rackham’s delicate beauty conceals a voracious tumour that is eating away at her brain. Sugar’s sexual allure conceals a deep, twisting loathing for the male species and everyone else is hiding something, pretending to be what they are not. Just as the broad leafy streets of the rich are a veneer on the crumbling tenements of the poor, so do the human residents of nineteenth century Notting Hill project a decent Christian face as they button their expensive waistcoats very tightly over soiled undergarments.
It is not exaggerating to say that Mr Faber takes all this ugliness and wraps it in the most beautiful prose I have ever read, and I have read many books. This novel is one to keep. It rests easily among the greatest novels of all time and will, without doubt, come to be a classic. The Crimson Petal and the White is not just a story, it is something real and that is why it makes such uncomfortable reading.
Posted by Judith Arnopp at 01:58 No comments:

Back in the Driver Seat

You’ve probably been wondering where I’ve been or maybe it's been so long you’ve forgotten all about me but, whichever camp you fall into, I am back ... for good.

For the past year my blogs have been sporadic to say the least and that is because I have had nothing much to say – and I am one of those people who aren’t given to idle gossip; small talk just isn’t my thing.

The followers of my blog may remember that about a year ago I acquired the services of an agent. BRILLIANT!! I thought, at last my career will take off big time but, for once, the oracle was wrong and it didn’t.

It is easy for an un-agented author to think that the services of an expert from the publishing world is the one thing that your career lacks. But this isn’t always so. It wasn’t long before I found I didn’t like it, nothing was happening, things were too slow. I wanted action. Patience isn't my thing either :)

There isn’t much point being a novelist if it doesn't make you happy. I am not in it for a big pay out (although of course that would be nice). I write because I have stories in my head that need to be heard. I’ve written since I was eight years old and I need to do something with it.

The first thing the agent suggested (suggested not demanded) was that I remove Peaceweaver from the shelves as a self-published tag might put off serious publishers. I did so because I thought she must know best; I placed all my eggs in her basket, so to speak.

Of course, without Peaceweaver I was left with nothing to market, nothing to blog about, nothing to peddle. So I sat at home, quickly completed the final edits of The Forest Dwellers and finished the first draft of The Song of Heledd.

Then I twiddled my thumbs, made a lot of phone calls, drank alot of coffee and watched enviously as my peers happily continued to produce and market their own excellent novels without recourse to expert help.

I began to write short stories and, as my poetry and shorts were not in the agent’s hands, had a few published. Things were a bit better but still things felt wrong somehow. It took me a while to realise I was no longer happy.

In the end it was my lovely old fella that pointed out what was wrong and suggested I terminate the agreement which, after much deliberation, I did!

I don’t know why the agent failed to sell my work, perhaps my novels are unmarketable, although my readers don’t seem to think so and I get emails every week asking when The Forest Dwellers will be published. I don’t think she fully understood the genre or where I was coming from. I felt she tried to twee my writing up, make it like other big name authors who shall remain nameless. ‘Write a Tudor novel,’ she suggested more than once but I don’t want to write Tudor novels.....

I’ve been agent free for a whole week now and already I feel so relieved, as if I’ve put down a bag of very heavy shopping. In that short time I have put the wheels in motion for a re-edition of Peaceweaver with a prettier cover and complete interior reformat. The Forest Dwellers should be issued at the same time with The Song of Heledd following shortly afterwards in (2012). Then I had better write some more.

It feels good to be in control of my own work again. My kids always accuse me of being a control freak and perhaps they are right. All I know for sure is that I’ve been reformatting, editing, looking at book cover designs and feel involved and a totally happy bunny again. And once the manuscripts are off to the publishers I will have a look and see how easy it is to get them onto Kindle.

So, it’s onwards and upwards! Watch this space!
Posted by Judith Arnopp at 01:12 No comments: