As the spring approaches and we all begin to think about day trips and picnics I thought I'd reblog this piece I wrote about Sudeley. 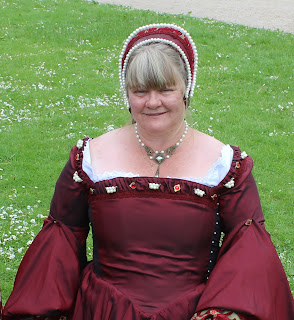 Sudeley Castle is a comparatively small place in the scheme of things, set against the backdrop of the Cotswolds. Sudeley is, and has been, many things; today it is a family home, a beautiful garden, a historic jewel, and the last resting place of an English queen. The Castle is steeped in history and was first mentioned in a 10th century charter. King Ethelred hunted deer in the park and later, when the castle passed to Goda, her distant relationship to William the Conqueror, saved it from Norman take over.

Sudeley remained in the hands of Goda’s family until the reign of Henry V when the castle was gifted to Thomas Boteler in way of repayment for his action in the war with France. It was Boteler who began to transform Sudeley into an enviable home, enlarging and updating the existing fabric of the building to create a place fit for royalty. 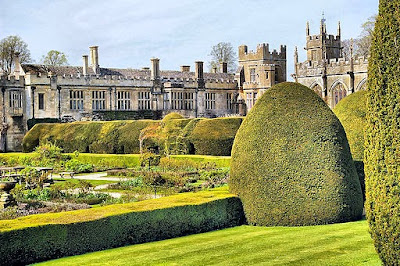 When the Lancastrians were defeated and Edward IV took the throne the Boteler family were forced out and Sudeley’s new owner was no other than the king’s brother, Richard of Gloucester, later King Richard III of car park fame.

When the tables turned again and Richard was defeated at Bosworth, Henry VII took it over, bestowing it on his loyal uncle Jasper Tudor. After Jasper’s death Sudeley once more became crown property.

Henry VIII visited once with Anne Boleyn. They met with Thomas Cromwell there to discuss the reformation of the monasteries and took a keen interest in the Blood of Christ housed at nearby Winchcombe Abbey. At this time the castle was run down and unoccupied for much of the time. 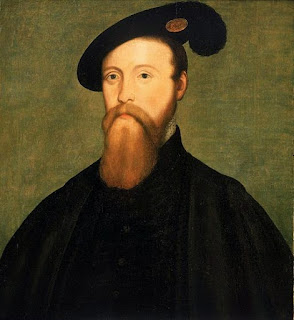 On his accession to the throne Edward VI made his uncle, Thomas Seymour, Lord of Sudeley and after his marriage to Katheryn Parr, Seymour and his new wife made their home there.
The Seymours implemented many improvements and Katheryn took great care in choosing the décor of the nursery for their expected child. Unfortunately, to Thomas Seymour’s sorrow, Katheryn died scarcely a year later, having given birth to a healthy daughter, whom they named Mary. 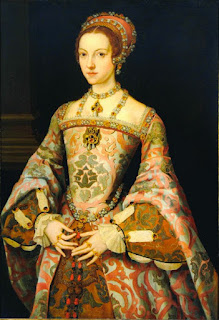 With Thomas’ ward, Lady Jane Grey, acting chief mourner Katheryn was laid to rest in St Mary’s church adjacent to the castle. Today visitors to Sudeley can view a love letter and portrait gifted to the queen by her husband.

Katheryn’s step daughter and friend, Elizabeth Tudor, later Queen Elizabeth I, visited Sudelely on three occasions during her reign. It is easy to imagine her walking in the garden, remembering her stepmother, recalling conversations, small personal details of their shared life that are now lost to history.
Sudeley’s history doesn’t stop with the Tudors. During the civil war Prince Rupert made the castle his headquarters, and Charles I stayed there for a time during the campaign to take Gloucester. 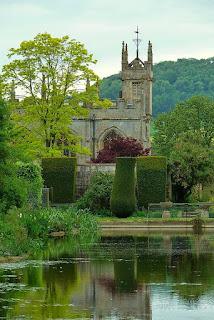 During the course of the war Sudelely passed back and forth between Royalist and Parliamentarian hands until Parliament ordered the ‘slighting’ of Sudeley making the house indefensible. The roof was removed, and the rest of the building fell swiftly into decay. The fine worked stone was quarried by locals until the grand castle became nothing more than an attractive romantic ruin. For the next two hundred years it was left to the mercy of the elements, a trysting place for lovers, or a hideaway for thieves.

In 1782, Katheryn Parr’s grave was rediscovered. The lead casket was opened the body found within reported to be 'uncorrupted'. She was reinterred in 1817 by the Rector of Sudeley and a plaque copied from the original inscription on the lead coffin placed upon it. Today there is an effigy on the tomb but this was made in Victorian times. 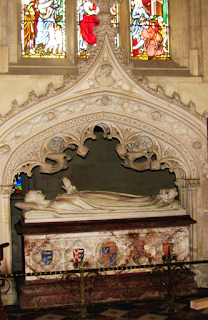 Sudeley remained in elegant decay until the nineteenth century when it was bought by two brothers, John and William Dent, who embarked upon a restoration project. They employed architect Sir Gilbert Scott to restore the chapel. The walls and large parts of the castle were restored. Finally Lady Emma Dent spent almost fifty years putting the finishing touches, filling Sudeley with fine art and historical artefacts.

Yet, of all the people mentioned in this potted history; the Lords, the ladies, the kings, the politicians; it is Katheryn’s memory that lingers. Visitors flock there, not just to see a splendid house and a magnificent garden; they go there because of Henry VIII’s last queen, Katheryn Parr.

The Tudor style parterre is only a reconstruction but, although Katheryn may have gone it is easy to imagine her there, inhaling the scent of the flowers, the kiss of summer rain on blush pink petals.

While you move quietly between the roses, or pass through the old yew hedge, you can imagine a footstep on the gravel behind you, the sweeping red skirts of her kirtle as she joins you. And as she follows you around the flowerbeds, you may feel the brush of her hanging sleeves. 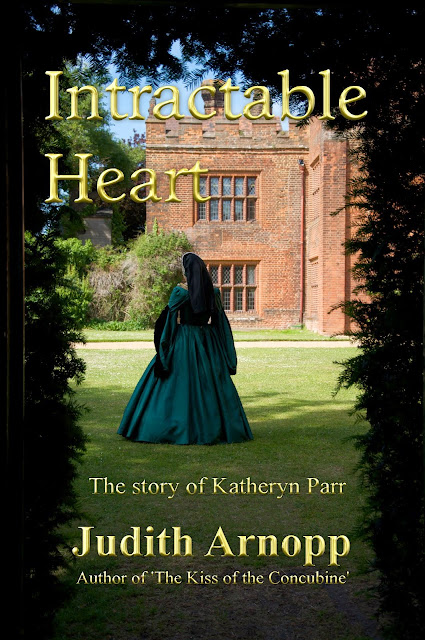 Judith is the author of seven historical novels and is currently working on a trilogy tracing the life of Margaret Beaufort. Book one of The Beaufort Chronicles, The Beaufort Bride will be out soon. 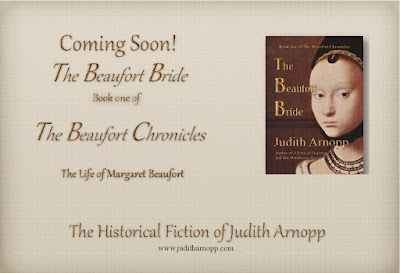 Pictures of Sudeley Castle and of the church at the castle are both licensed under the Creative Commons Attribution 2.0 Generic license, the former to Gordon Robertson, the latter to Jason Ballard.  The picture of Katheryn Parr's tomb is licensed to TudorQueen6 via the Creative Commons Attribution-Share Alike 3.0 Unported license.  The portraits of Thomas Seymour and Katheryn Parr are in the public domain due to expiration of copyright.

The Plight of Picard 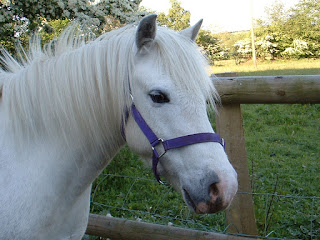 My blog today is very different to the ones I usually write. No mention of history or books but my post today concerns something even closer to my heart.

This is Picard in his younger days. He is a Welsh Mountain Pony, the most well-mannered little man you could wish to meet, which is surprising considering his history.

We first met Picard when he was a foal. We were at a horse sale in West Wales, buying buckets and lead ropes for the ponies at home. We were horrified when a large over-crowded livestock lorry turned up and men with large sticks began driving yearlings from the back. They were terrified. It was a horrible sight, the sort that makes you shamed to be human. Every year the surplus wild ponies are rounded up on the mountain, they are squeezed into trucks and sold for silly prices at sales around the country. The low prices often mean they are bought on impulse, go to unknowledgable homes, or end up as fodder for the meat man, shipped to Europe for the horse meat industry. It seems a sorry waste of life for these beautiful ponies to end up as dog meat.

Needless to say, when it was Picard’s turn to be hounded into the sale ring, frightened with whips to make him prance and show off his good points, he was the last of a very long queue. The few people who had come in search of a cheap pony to rehome had already bid, their pockets were empty and the only person (I use the term lightly) bidding on Picard was the meat man. The meat man never bids high so I took my hands from my pocket and decided to take this wide eyed, terrified baby home.

My daughter already had a Shetland she was growing out of so I thought maybe Picard would turn out to be a good second pony. I won him with a £12 bid – a muddy, dark grey pony with burs in his coat and terror in his eye. He didn’t want to get in the truck; there was no way to load him without scaring him even more but with great difficulty we managed to get him safely home.

He trembled in the corner of his stable for days, freaking out each time we went in to change his water and replenish his hay. The burrs and mud had to remain in his coat while I sat on a bucket with my back to him and sung nursery rhymes and lullabies so he'd become accustomed to my voice and presence. This went on for days and still he wouldn’t look at me. Each time I turned round he stuck his nose in the corner and put his head down. He was so unhappy in those early days but eventually we noticed a change. He no longer tried to scale the stable wall when we went in; he began to trust the bucket and snatch a little hay from the rack. 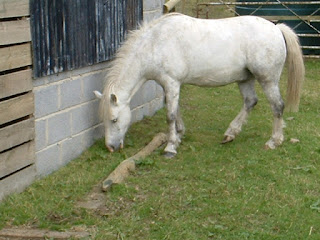 When he was ready to emerge from the stable his first friend was Rudolph, the Shetland, his second was Jazz, another Welsh Mountain Pony, and Cynon the cob cross. His time was spent with them in the field where he could gallop about, kicking his heels, happy in their company. It was a brilliant thing to see.

Whenever we rode or groomed the other ponies, Picard watched from a distance, ready to flee if we so much as took one step toward him. But, slowly, he came to realise we were never going to wallop him over the head with a pole, or force him to do anything he wasn’t happy with. Little by little he grew calmer, we were allowed to brush him, we could lift his feet one by one, scratch his hind quarters but never his head. He remains head shy to this day and getting a head collar on was a nightmare but by degrees, we managed it. My eight year old daughter could lead him around, sit on his back, tack him up but he was never really happy with it and we could only progress so far. After a year or so, we desisted but he remained with us, a companion to our other ponies.

That was twenty years ago, hopefully things have changed for ponies like Picard but I don’t think they have. There are far too many greedy, unkind human beings and too many unwanted ponies. One by one our ponies died of old age and now Picard is the only one remaining. 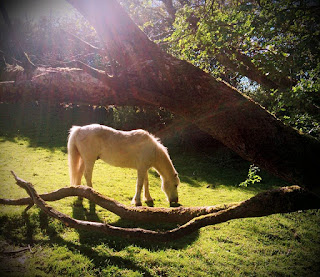 Age is catching up with my husband and I now. Our children have left home and, due to health issues, we have had to give up our beloved smallholding. We sold it at the end of last year and the new owners kindly allowed Picard to stay until the new home we had sorted for him was ready. He was due to move to a lovely home next week but to my horror that has now fallen through and the new people who now live in the lovely smallholding want him moved.

So this blog is a plea for a good forever home for a much beloved veteran who requires gentle handling and understanding. He lives out all year round, survives on air and doesn’t require lush grazing. Picard is very gentle. He has never kicked or bitten and will follow you to the moon if you wave a bucket under his nose and he is good with the farrier. We are happy to help with his costs and essential veterinary care. Most of all we want the last years of his life to be as happy as the last twenty. He needs a safe, secure, caring home, preferably with other horses.

Thank you for listening.
Posted by Judith Arnopp at 02:00 No comments: