The Dark Ages is, I think, one of the most fascinating eras in history. However, it is a difficult period to research. This was an era where very little was recorded in Britain. There are only a handful of primary written sources. Unfortunately, these sources are not very reliable. They talk of great kings and terrible battles, but something is missing from them. Something important. And that something is authenticity. The Dark Ages is the time of the bards. It is the time of myths and legends. It is a period like no other. If the Dark Ages had a welcoming sign it would say this:

But, I don’t want to talk about King Arthur today. I want to take a look at one of his famous Knights:

Who was Sir Mordred and how does he fit into Arthurian Legend?

Mordred was the son of Morgause — Arthur's sister — but there is debate as to who his father was. Some say his father was Morgauses' husband, King Lot of Orkney, which would make Sir Gawain his brother. While others say he was Arthur's illegitimate son, begot with his sister. Either way, he had royal blood running in his veins. Of all the knights in Arthur's court, Mordred was beyond suspicion. So how did Arthur and Mordred find themselves leading opposing armies on that fateful day in Camlann?

"The strife of Camlann, in which Arthur and Medraut fell."

Although this cannot be counted as a primary source, it does, however, draw on older stories — probably verbal — of the telling of this great battle. If you have not already noticed, the quote above says nothing about Arthur fighting Mordred at Camlann. It states that both men fell (died) at Camlann. Mordred was one of Arthur's most loyal knights; therefore it would make sense that they died together because they fought together. Which begs the question, how did Mordred become the villain of the tale?

And we believed him.
The ancient Welsh texts were the first to associate Mordred with Camlann.  But Monmouth's casting of Mordred as the villain was soon accepted as the truth and others expanded upon this story making Mordred something of an Anti-Christ  — or an Anti-Arthur.

Time passes, and the story changes. Lancelot enters the tale, and some of Mordred's villainous activities are passed on to Lancelot - such as the affair with Guinevere.

Thomas Malory who penned Le Morte d'Arthur sticks with tradition and casts Mordred as the villain, but this time there is a slight twist to the tale. In Malory's version, Mordred believes that Arthur is dead, slain by Lancelot. Mordred, with parliaments consent, is crowned King and when he hears that Arthur is alive, he does take his army to meet him. But this begs the question, why would the Knights follow Mordred instead of Arthur. Malory gives us a clue.

"...with Arthur was none other life but war and strife, and with Sir Mordred was great joy and bliss."

In the Lancelot-Grail Cycle, Mordred is succeeded by his sons. The sons, like their father, had treachery running through their veins. In the older text, it is Constantine who tracks the brothers down and kills them. In later versions, it is Lancelot and Bors.

But the extent of Mordred's treachery does not end there.

This quote is from Dante's Inferno. If you seek Mordred you will find him in the lowest circle of Hell — a place set-aside for traitors.

“I can't ignore what I saw. Gaius, Mordred is destined to play a part in Arthur's death.”

Mordred is cast as a magically Druid boy in the BBC show Merlin (2008 - 2012). He becomes a Knight of Camelot and has no notion of treachery until his beloved is sentenced to death. Ironically, if Merlin had accepted Mordred as a source of good, then Arthur would never have died — but hey, what kind of story would that have made?

Mordred became the villain, but maybe he was not so evil as we have been led to believe. 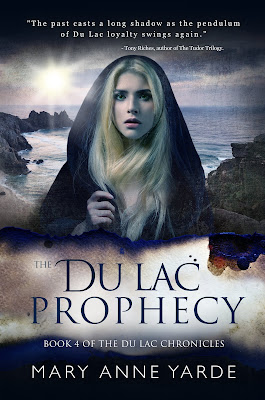 Distrust and greed threaten to destroy the House of du Lac. Mordred Pendragon strengthens his hold on Brittany and the surrounding kingdoms while Alan, Mordred’s cousin, embarks on a desperate quest to find Arthur’s lost knights. Without the knights and the relics they hold in trust, they cannot defeat Arthur’s only son – but finding the knights is only half of the battle. Convincing them to fight on the side of the Du Lac’s, their sworn enemy, will not be easy.

If Alden, King of Cerniw, cannot bring unity there will be no need for Arthur’s knights. With Budic threatening to invade Alden’s Kingdom, Merton putting love before duty, and Garren disappearing to goodness knows where, what hope does Alden have? If Alden cannot get his House in order, Mordred will destroy them all.

Yarde grew up in the southwest of England, surrounded and influenced by centuries of history and mythology. Glastonbury — the fabled Isle of Avalon — was a mere fifteen-minute drive from her home, and tales of King Arthur and his knights were a part of her childhood.