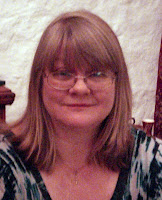 I am really pleased to be taking part in The Next Big Thing: Authors Tagging Authors!
I was tagged by my really good friend, author Karen Aminadra and it's my pleasure to keep this going.

So, what I do is answer the questions below, tag a new set of authors, then they answer, tag authors, etc.

I’m answering questions about my novel, The Winchester Goose which will be available very soon in paperback and is also currently available through Amazon Kindle.

What is the working title of your book?
The title has always been The Winchester Goose. I did consider ‘Geese’ at one point, since there is more than one ‘Goose’ involved but I decided the singular had more impact.

Where did the idea come from for the book?
The Winchester Geese were prostitutes, living and working in Southwark who paid their rents to the Bishop of Winchester. I have studied medieval women for years and most of them have been depicted in historical fiction in one way or another, so I was delighted to find a social group that is largely overlooked. I began to think about how a prostitute from the lowest segment of society might have viewed the goings on at Henry VIII’s court.

What genre does your book fall under?
It's Historical Fiction with a dollop of romance and a hint of adventure.

What is the one sentence synopsis for the book?
Tudor women, high and low, living and loving beneath the shadow of King Henry VIII.

How long did it take you to write the first draft of your manuscript?
Drafting the first manuscript is the easy bit, it took about a year but the research took a great deal longer than that …and then the redrafting and the edits longer again.
Which actors would you choose to play your characters in a movie rendition?

A movie! What a lovely thought. I am not very good at remembering the names of actors but I will give it a shot. Francis Wareham is very dashing and handsome but not very old. He would need to be played by someone like, erm …Simon Woods who was Mr Bingley in Pride and Prejudice, the Keira Knightly one. I think Alex Kingston would make a brilliant Joanie Toogood, the ‘goose’. She did a great job with Moll Flanders and I think she has all the necessary credentials.
Isabella and Evelyn Bourne are gentlewomen from court. Emma Watson (Hermione in Harry Potter) would be good as Eve, and the girl who plays Edith in Downton Abbey, Laura Carmichael, would make a lovely Bella. For Peter, who is a costermonger from Southwark it would have to be Rupert Grint – wonderful young actor who played Ron Weasley in Harry Potter. Henry VIII would not be played by Jonathon Rhys Meyers (as gorgeous as he is) I think the role is better suited to Steven Waddington who played Lord Buckingham in the Tudors. As to Katherine Howard and Anna of Cleves, goodness, I have no idea. I will leave that to the directors!

What other books would you compare this story to, in your genre?
I’m not sure. It is quite different coming as it does from the mouth of a prostitute. Michel Faber’s The Crimson Petal and the White is similar in theme although that is set much later in Victorian England.

What else about the book might pique the readers’ interest?
It offers a new perspective on events in Henry VIII’s reign and looks at how the lower echelons of society might have viewed matters. It contrasts the rougher side of life in Tudor England with the glittering royal court.

The Winchester Goose will be available on Amazon Kindle before Christmas and in paperback early in 2013.

And for the authors I have tagged:

Helen Spring – Author of Memories of the Curlew, Strands of Gold and The Chainmakers.
Mary Middleton – Romance Author of  Vittorio’s Virgin, Come, Dance with Me and Where the West Wind Blows.
Cas Peace - Author of The King's Envoy and The King's Champion
Gregory House - Author of The Red Ned Tudor Mysteries

Over to you guys!
Posted by Judith Arnopp at 00:32 No comments: 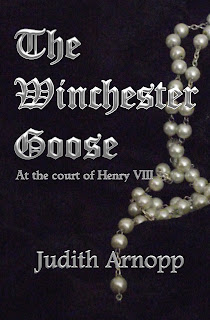 I am just applying the finishing touches to The Winchester Goose now and it should reach the shelves in time for Christmas.
Writing this one has been a whole different experience to my other books. My confidence in it waxed and waned like the moon; sometimes I hated it and thought I should bin it, other times it seemed to be the best thing I have written so far.
As usual I am breaking all the rules, writing in the first person present tense but I make no apologies. My books are conceived in my head and nurtured in my  heart, they just sort of happen. Planning and rules go out of the window.
My characters are always flawed,  and the first person narrative, that gives voice to all those inner thoughts that we usually conceal, makes them human.
You won't find many unstained characters in The Winchester Goose. Francis Wareham is a serial womaniser, thoroughly charismatic but incurably disloyal, and I have  made no attempt to dress him in prettier armour.
I haven't hidden Joanie Toogood's flaws either. Probably the most endearing person in the book, Joanie is a prostitute from Southwark who, rather like a saucy Florence Nightinglae, seeks to nurture anyone who will let her. As a result her business flourishes and she is popular with both commoner and nobleman alike. Her downfall begins when she meets Francis and is unable to resist his boyish charm.
Although she is a bit of a bad girl, her  humanity is very close to the surface, and it is Joanie's uneducated observations of events at the Court of Henry VIII that make us smile.

Tudor London: 1540. Each night, after dark, men flock to Bankside seeking girls of easy virtue; prostitutes known as The Winchester Geese. Joanie Toogood has worked the streets of Southwark since childhood but her path is changed forever by an encounter with Francis Wareham, a spy for the King’s secretary, Thomas Cromwell.


Meanwhile, across the River Thames, at the glittering court of Henry VIII, Wareham also sets his cap at Evelyn and Isabella Bourne, members of the Queen’s household and the girls, along with Joanie, are drawn into intrigue and the shadow of the executioner’s blade.

Set against the turmoil of Henry VIII’s middle years, The Winchester Goose provides a brand new perspective of the happenings at the royal court, offering a frank and often uncomfortable observation of life at both ends of the social spectrum.

The Winchester Goose will be available on a Kindle near you very soon.
Paperback to follow in 2013.
Posted by Judith Arnopp at 08:47 2 comments: