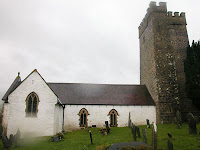 For fifteen years I have lived just a stone’s throw from St Gwenog’s church in Llanwenog, Ceredigion but have only recently found the time to go and have a close look. (I will blog another time about the mystery of where time goes to and what can be done to stop it.)

The Church of St Gwenog is delightful and anyone planning a trip to the area should put it on their list of places to visit. It is only a small church and does not take long to explore but entering the church is like stepping into another world.

A memorable battle was fought in Llanwenog in 981, between the Dane, Godfrid, and the native Welsh chieftan, Eineon ab Owain. A battle in which the Danes were totally defeated. Nearby there is a field on a farm named Ty Cam where the engagement is believed to have occurred. The field is called Cae'r Vaes, or roughly translated, ‘the battle field’ so, whether the story has its root in fact or legend, it is somewhere else I have always intended to go. But, once again ‘time’ has been my enemy. I will go there tomorrow, I say, hoping that tomorrow will actually come.

In ancient, pagan times the word ‘Llan’ was used to denote an enclosure or sacred place. Early Christians built their churches in such places in an attempt to displace older religions. By utilising ancient religious sites, Christian priests thought to encourage pagan worshippers to abandon the old gods and adopt the new teachings.

There are many such sites in Wales and Llanwenog is possibly one of the oldest for, although most of the extant building dates back to the 13th century, the foundation of the earliest church dates to the 6th. I circumnavigate the graveyard and it is still just possible to detect that the original enclosure or ‘Llan’ was circular, or oval, in shape although it has now been extended and squared off at one end.

We know almost nothing about St Gwenog. She is mentioned in the Laws of Howell Dda copied in the 15th century and in the 18th century an annual local fair, held in January, was known as Ffair Gwe

nog’s. Links have also been made with St Gwennlian who was active locally but it is a link that is difficult to establish. Even St Gwenog’s Well, once famous for its healing properties, has long since disappeared. Its previous existence points to the reason for the site being allocated as a ‘Llan’ in pagan times. Water was the earliest form of worship followed by that of the sun until Christianity incorporated elements of those religions into its own.

Inside the church I see thick whitewashed walls. At the altar is an early stone carving of Mary and St John at the foot of the cross. It is very badly weathered having originally been built into the gable end of the side chapel. Now, it is safe and sound in the new altar, the figures barely discernible. I turn away and spy an early wall painting of the Apostles and the Ten Commandments, the faces peer out at me through the fog of time while, above me, the beautiful ceiling rafters smile down. I am escorted to the door by richly carved pews and I climb a few worn stone steps while the tiny carved heads of the saints watch me as I pass beneath them.

Outside the battlemented tower draws my eye from the older, softer parts of the church. It is an imposing feature, providing protection for the village in times of strife. It was a later edition to the building, built in the 15th century by Sir Rhys ap Thomas (who’s heraldric shield I spy above one of the windows) to commemorate Henry VII’s victory over Richard III at Bosworth in 1485. Many men from Llanwenog parish fought and died for Henry in his quest for the throne but, once established, the Tudor dynasty did little to enhance the fortunes of their Welsh countrymen.

I sit for a while among the markers of the dead and think about what I have seen. I am touched by the peace and the great age of the place and love every inch of it. But for me, the best thing about the visit is the font. I slip back inside for another look.

It used to sit near the western doorway but has been moved to the south side of the lady chapel. Someone has filled it with a tacky flower arrangement totally out of keeping with the awesome antiquity of the piece. With a finger I trace the marks where the cover (now lost) once rested. The font dates from the Norman period and it is showing its age. The stone is carved with the heads of the twelve apostles. They are worn, not just by time but from centuries of visitors drawn to touch the primitive features as I am doing now. These carved faces have been described variously as ‘crude’, ‘grotesque’ and ‘rough’ but to me, they are beautiful. The tracks of the ancient chisel giving voice to the long dead craftsman. I wish I could spend longer here. I run my fingers over the surface and feel as if I am clasping the gnarled hand that 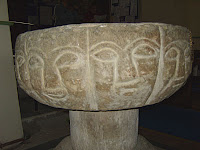 We have been planning a camping weekend in the Brecon Beacons, not too far away and breathtaking in its beauty. However, the forecast is grim and my old fella not as enthusiastic as he could be. I wish the Met office would be more precise, it says 'light rain' for Friday and Saturday and the best day, Sunday, they promise will be 'cloudy.' Now, ordinarily a little light rain is no problem but for a long time married couple a little past the flush of youth, a miserable wet weekend under canvas could be dreadful. He will moan, well they always do dont they, even in fine weather and the cheap, carefree hike through the hills I had invisaged could well turn out to be a sopping wet, cold nightmare. My dream camping partner has never been Victor Meldrew and a Victor Meldrew with wet feet will be even worse.
So, to pack or not to pack? that is the question.

There are several reasons for choosing the Beacons apart from the scenery. I want to visit some iron age sites, to stride across the hills and try to imagine them as they were a thousand years or more ago. Legend says that, after the slaughter of her family, Heledd founded a small church, now known as St Illytds some twenty miles away, outside the national park and I would like to visit it to get an idea of the landscape in which she ended her days.
There are so many neolithic sites in the Brecon area and I love to photograph the standing stones (most actually fallen now), and later paint them, capturing the rolling mist and the purple tipped mountains in the distance. I've never been to Llanthony Abbey either although I have always intended to. Life is beginning to roll by so quickly and we have no free weekends left in August and it will be another summer of not doing anything I really want to. So, dammit, I think we will go and if we end up spending most of the time drying off in the pub - so be it.
Posted by Judith Arnopp at 04:34 2 comments:

How long ago all that warm weather seems now. In Wales July was the wettest month since November and August hasnt exactly made a dry start. But there is an upside to it, it means no one expects the grass to be mown every week and if the flower beds look droopy and dismal, well, it isnt my fault, how can I be expected to garden in the rain, let the slugs have them I say. So, I stay at my desk and dash out splendid stories - well, hopefully splendid stories anyway. I am more than a quarter t hrough my next, the third novel.

It is entitled The Song of Heledd and is based on some fragments of Welsh 9th century poetry but set in the 7th. The Canu Heledd is narrated by a lone woman, a woman mourning for the loss of her kin and kingdom. She is the princess Heledd, sister to Cynddylan, King of Pengwern who togther with the king of Gwynedd and Penda of Mercia make war upon Oswald and his son Oswiu of Northumberland. An attack on Pengwern results in the entire dynasty being destroyed apart from Heledd, whose keening sorrow reaches us across the centuries in the form of a scrap of poetry.
The poems from the sequence make many references to Cynddylan's hall and her father, her many brothers and sisters are named and some details as to their lifestyle. The thing that sparked my interest is the misery in Heledd's voice and her great sense of guilt. She feels responsible for the massacre of Pengwern but we do no know what her sin is. So this is where I come in to fill in the gaps.
The Song of Heledd is a tragedy, a love story and a tale of war. Heledd takes the reader back into the dusky realms of Briatin's Celtic past to explain just what happened to overset her security and undermine her brother's power. Below is a teaser, hope you enjoy.


I dreamed of the eagles long before they came. In my dream they swooped down from their cloudy crags, blackening the sky, the wind from their wings lifting my hair. They circled, talons extended, before settling on the field of death to tear at the corpses of my brothers.
The dagger of loss ripped open my heart as i waded through my slaughtered kin to find Cynddylan's body and when I saw his limp standard, his torso twisted, his neck broke, his mouth gaping, my world turned dark. I kneeled in his blood and tried to close the yawning wound upon his chest but he was gone. All my brothers were lost, the kingdom was shattered and only I was left, alone. I threw back my head, unprotected beneath a vast and empty sky.

When I woke in the morning, safe in my furs, I flung back the covers and ran outside. My playmates tumbled as usual beneath a kindly summer sky while their mothers spun cloth in the shade of the alder tree.
My brother, Cynddylan, King of Pengwern strode across the enclosure with an arm about his companion. I ran to tell him of my terrible dream but he waved me away, intent on the affairs of men.
As I grew to womanhood the dream faded and I forgot it. It was many years later when the clash of battle first sounded that I remembered what was to come.
Posted by Judith Arnopp at 01:13 1 comment: