The life of Margaret Beaufort 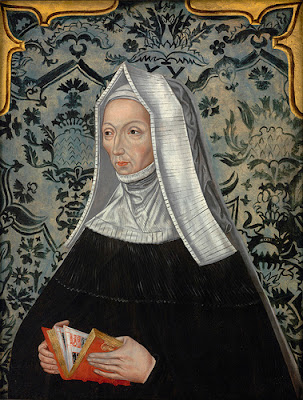 Margaret Beaufort in often depicted both in fiction and non-fiction as manipulative, duplicitous, vindictive, sometimes a little mad. In my own book, A Song of Sixpence, she appears in her latter years, an unwelcome mother-in-law in the marriage between Elizabeth of York and Henry VII. Writing from Elizabeth's perspective, Margaret at first appears hardened, unfriendly but as their relationship continues, and Elizabeth produces a string of heirs for the king, Margaret softens, just a little, and their friendship develops. Ultimately, as she has at many deathbeds during her life, Margaret weeps copious tears at her daughter-in-law's demise.

I could have written her all sweetness and light but I don't believe she was like that. My research shows a woman who lived an incredibly hard life, and difficult lives take their toll. She would have had trust issues, perhaps she learned self-containment was the best policy but Margaret's cool exterior shields a warm and vulnerable heart. Margaret was a good woman; a virtuous, generous soul whose determination to get her son on the throne took guts and strength.

Women who live such lives often don't have time for niceties, in my experience they can be efficient to the point of rudeness. Margaret would not be one to suffer fools gladly, or tolerate nonsense. Once Henry was on the throne her vast experience and level head enabled her to offer wise and solid advice. She gave freely to charity, endowed universities and hospitals and encouraged theological study. All these characteristics are positives yet she is consistently depicted in the negative, that is, if we believe serious, pious, pro-active, politically motivated women to be negative. 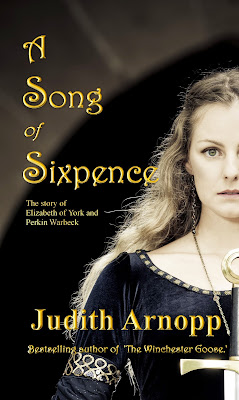 Margaret was no beauty, she was not a simpering, pathetic princess and is therefore difficult to slot into a fictional stereotype. She enters A Song of Sixpence toward the end of her story. She has achieved her ambitions, her goal to put her son, her blood on the throne of England has been realised. Henry has overcome all opposition, the royal nursery is full of children. She is elderly, and as the king's mother afforded the honour of a queen. The key words for the latter part of her life story are : success, triumph, honour. But what about her beginnings? 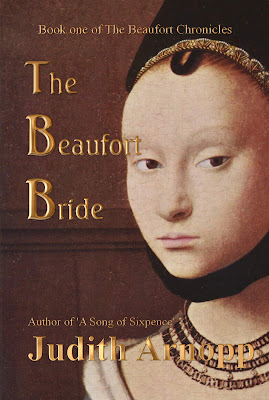 An excerpt from The Beaufort Bride:

It is a wild night. Outside, the trees are blackened by rain. They thrash their limbs in a dance of anguish, shedding leaves and twigs across the lawn, but here, at the nursery window, I am safe and dry. I press my hot cheek against cool thick glass and peer into the darkness of the garden.
The shrubs and hedges assume threatening shapes; the yew tree by the gatehouse is a hump of deep black menace. My seven-year-old mind forgets the times my stepsisters and I have happily played there on the green mead in the sunshine; tonight I see only threats, only danger, only demons.
A fistful of raindrops spatters against the window and I draw back with a gasp as a yellow leaf, as large as my face, smacks suddenly onto the glass. I stare at it, stuck there like a hand held up in warning. Do not look, Margaret!
But I do look. I cannot help it. If there is a beast in the garden, I have to see it. I have to witness the moment it leaps from the darkness.
Ever since I can remember the grown-ups have kept secrets from me. I didn’t know my mother had been married before, that my siblings had a different father to mine. It was Oliver who told me, and ever since he has delighted in revealing other, more horrible things. Now, to deny him pleasure, I am determined to learn secrets for myself. Secrets that are sometimes best left undiscovered.

No one tells me when I am made a ward of the Duke of Suffolk, fated to marry whomever he pleases. It is Oliver who breaks the news and, at first, I don’t believe him.
“Don’t be silly,” I scowl. “Stop teasing.”
“Oh, I’m not teasing.”
He slides from his seat and comes skulking toward me, his head thrust forward, a grin of mischief smeared across his dirty face. “You have to do as he says and go happily to your marriage, even if he weds you to a grandfather who will beat you twice daily.”
“He wouldn’t do that.”
I can hear the doubt in my own voice and it spurs him on to greater revelations.
“He can do with you as he wishes and you have to obey him or, if you don’t, you’ll be shut up in the Tower as your father would have been if he hadn’t -”
A sudden movement and Edith comes to stand beside me. She places her hand on my arm.
“Oliver, be quiet. You are being cruel. Don’t listen to him, Margaret, just ignore him. Why don’t you come and help me sort colours for the tapestry I am planning?”
Edith, my older and favourite sister, grabs my wrist and tries to tug me toward her chair but, drawn to the awfulness of Oliver’s secret, I pull away.
“What do you mean, Oliver? My father in the Tower; what do you mean?”
He stands tall, runs two fingers across his upper lip, presenting a sudden image of how he will look when he is a man with a fine moustache and beard. His head is back and he squints down his long nose with a smirk. He is no longer a companion of the nursery; he is an accuser, a torturer, a devil with wickedness upon his lips.
“Your father was a traitor, waiting to be sent to the Tower. The king was going to chop off his head … but your father sliced his own wrists before he could be taken.”
With a gasp of horror, my stepsisters look up from the hearth where they are sewing. Everyone is looking at me. My cheeks begin to burn. I can feel their eyes boring into me, waiting for my reaction. I cannot move; my ears are ringing. It is as if he has struck me but I manage to raise my chin and clench my lips across my teeth.
Oliver watches my struggle for composure, but his venom is subsiding. He is clearly calculating our mother’s reaction should I run to her with the tale of his sins.
It takes a great deal of effort to shrug my shoulders and turn away as if nothing is amiss. His uncertain laughter follows my stiff-legged journey toward the door. I reach for the latch but before I pass through it, I feel Edith’s hand on my shoulder.
“Margaret, don’t believe him. He heard it from the servants – it is likely just tittle-tattle.”
I look into her kind eyes and read the lie hidden there. She seeks to spare my hurt, but I can tell she believes the story. I try to smile but my mouth goes out of shape, my chin trembling. She places a gentle hand on my coif but I shake it off, cuff away the first tear before it has a chance to drip onto my cheek.

I am happy to announce that Book One of The Beaufort Chronicles: The Beaufort Bride tracks Margaret's life from her beginnings at her mother's house, Bletsoe Castle, through her life in Wales and the trials of her marriage to Edmund Tudor, her widowhood, the birth of Henry and her betrothal to Henry Stafford. 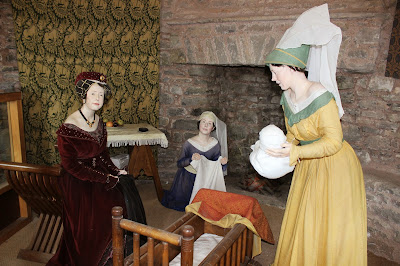 Book Two: The Beaufort Woman illustrates Margaret's development from a child into a young woman. It traces her journey through the wars of the roses, her second widowhood, her marriage to Stanley, and her political manoeuvres through the complexities of the conflict between York and Lancaster. She does not rest until the attainment of her dreams at Bosworth field.

Book Three details the reign of Henry VII and her role as The King's Mother in establishing, once and for all, the Tudor dynasty.

Book One: The Beaufort Bride . Click here to purchase your copy. 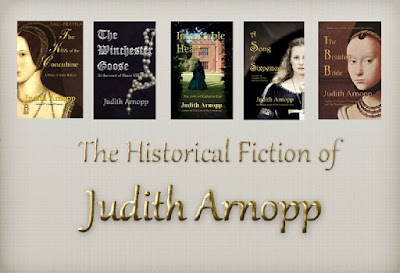 Judith Arnopp is the author of eight historical novels of the Tudor and Medieval period. She also blogs and offers talks on Tudor history. You can visit her webpage for more articles and information
Here 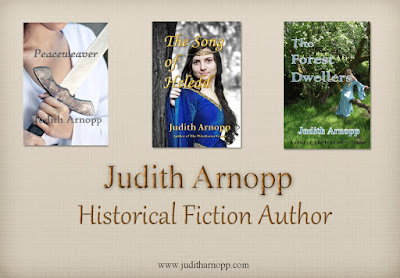 Photographs from Wikimediacommons or author's property.

Posted by Judith Arnopp at 03:09 No comments: