A thousand times, I thank you.

October and November have been mad bad months for me so far. At the end of October we were devastated by the news that our house buyers were pulling out and all our plans thrown into chaos. The news came on the morning of my other half's 60th birthday and it wasn't easy to shake off our disappointment and enjoy the day but, thanks to our lovely bunch of kids, all of whom joined us for the celebrations, we managed. 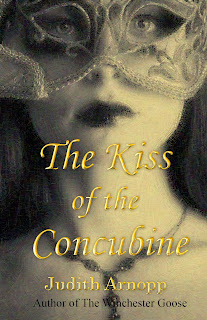 As is often the case, hot on the heels of the bad news came better tidings, this time in the shape of my latest novel, The Kiss of the Concubine (available now on a kindle near you). I am not very good at marketing but I organised a few blogs and interviews to alert the reading public that the book was released, then I sat back and waited to see if anyone would notice.

To my surprise it is flying off the shelves - well, it would be if e-books were kept on shelves. I have now ok'd the paperback version and that will also be available via Amazon, myself, or direct from the publisher very soon. but it isn't just the new book that is selling, my back catalogue is moving too and some wonderful reviews are coming in.

So, this blog is really to acknowledge and thank all  you wonderful people who enable me to carry on writing books. I want to thank the bloggers who hosted me, the reviewers who spread the word and most of all the people who buy my novels. Without you I would have been forced to give up long ago. I cannot describe the thrill I experience each time one of you emails or flags on Facebook how much you enjoyed a particular book/character/scene/blog. I don't crave fame or riches. It is your enjoyment makes it all worth while. So, thank you. I love you all :)

In case you've not noticed. The Kiss of the Concubine is the story of Anne Boleyn, from her own perspective tracing her love affair with Henry VIII and charting her downfall. It is a frank and often painful account of a doomed romance.

Here are some examples of what the reader reviews have said so far. "Well formed characters, great Tudor atmosphere. One of those reads where you feel a bit bereft when you get to the end - my measure for five stars"

" Highly recommended to any lovers of historical fiction. Worth buying."

" The reader is swept along with Anne, and the book is impossible to put down. Warmly recommended to those wanting to know more, but also to those who just love a good read"

"Judith Arnopp has found such a unique and fresh approach to this most famous of love/hate relationships that readers will be drawn into her atmospheric prose. She is so skilled at conjuring the sights and sounds of her chosen setting that you can almost hear the courtly music, smell the pomanders, and taste the suckling pig."


You can watch a trailer here.

Below is the introduction.

It is almost midnight and January has Whitehall Palace clenched in its wintery fist. The gardens are rimed with frost, the casements glazed with ice. Like a shadow, I wait alone by the window in the silver-blue moonlight, my eye fixed on the bed.
The room is crowded, yet nobody speaks.
I tread softly among them. The flickering torchlight illuminates a sheen of anticipation on their faces, the rank odour of their uncertainty rising in a suffocating fug. Few can remember the time that went before, and both friend and foe balance upon the cusp of change, and tremble at the terror of the unknown.
I move through the heavily perfumed air, brush aside jewelled velvet sleeves. At the high-canopied bed I sink to my knees and observe his face for a long moment. He is changed. This is not the man I used to know.
They have propped him on pillows, the vast belly mountainous beneath the counterpane, and the yellow skin of mortality’s mask is drawn tightly across his cheeks. There is not much time and before death can wipe his memory clean, I speak suddenly into his ear, a whisper meant only for him. “Henry!”
The king’s eyes fly open and his eyeballs swivel from side to side, his disintegrating ego peering as if through the slits in a mummer’s mask.
He knows me, and understands why I have come.
He whimpers like a frightened child and Anthony Denny steps forward and leans over the bed. “Your Majesty, Archbishop Cranmer has been summoned; he cannot be long now.”
Henry’s fat fingers tremble as he grips the coverlet, his pale lips coated with thick spittle as he tries to speak. I move closer, my face almost touching his, and the last rancid dregs of his breath engulf me. “They think you fear death, Henry. But you fear me more, don’t you, my Lord?”
“Anne?”
The sound is unintelligible, both a denial and a greeting, but it tells me what I need to know. He recognises and fears my presence. Those assembled begin to mutter that the king is raving, talking with shadows.
I sink into the mattress beside him and curl my body around his bulk. “How many times did we share this bed, Henry?” His breathing is laboured now and sweat drips from his brow, the stench of his fear exceeded only by that of his festering thigh. I tighten my grip upon him. “Did you ever love me, Henry? Oh, I know that you lusted but that isn’t the same. Do you remember how you burned for me, right to the end?”
I reach out to run my fingertip along his cheek and he leaps in fright, like a great fish floundering on a line, caught in a net of his own devising. One brave attendant steps forward to mop the king’s brow as I continue to tease.
“Poor Henry. Are you afraid even now of your own sins? To win me you broke from Rome, although in your heart you never wanted to. Even the destruction of a thousand years of worship was a small price to pay to have me in your bed, wasn’t it?”
Henry sucks in air and forgets to breathe again. A physician hurries forward, pushes the attendant aside and with great daring, lifts the king’s right eyelid. Henry jerks his head away and the doctor snatches back his hand as if it has been scalded.
Even now they are fearful of him. Although the king can no longer so much as raise his head from his pillow, they still cower. How long will it take for them to forget their fear?
Mumbling apologies, the physician bows and backs away to take his place with the others. As they watch and wait a little longer, the sound of mumbled prayer increases. “Not long now, Henry,” I whisper like a lover. “It is almost over.”
A door opens. Cold air rushes into the stifling chamber and Archbishop Cranmer enters, stamping his feet to dislodge the snow from his boots. He hands his outer clothes to a servant before pushing through the crowd to approach the bed, his Bible tucked beneath his arm.
I playfully poke the end of Henry’s nose. “Time to confess your sins, my husband.” Cranmer takes the king’s hand, his long slim fingers contrasting with the short swollen digits of his monarch. As he begins to mutter the last rites, I put my mouth close to Henry’s ear to taunt him.  “Tell the truth, Hal. Own up to all the lies you told; how you murdered and how you cheated. Go on ….”
But King Henry has lost the power of speech, and cannot make a full confession. Gasping for one more breath he clings tightly to Cranmer’s hand, and I know there is not long to wait before he is mine again. A single tear trickles from the corner of his eye to be lost upon his pillow.
“It’s time, Henry,” I whisper. “And I am here, waiting. For a few short years I showed you Paradise and now, perhaps, I can do so again. Unless, of course, I choose to show you Hell.”

***
If you would like to read more The Kiss of the Concubine is available in kindle format on Amazon UK and Amazon US and other Amazon outlets. The paperback will be available shortly.