My next novel: Intractable Heart: the story of Katheryn Parr 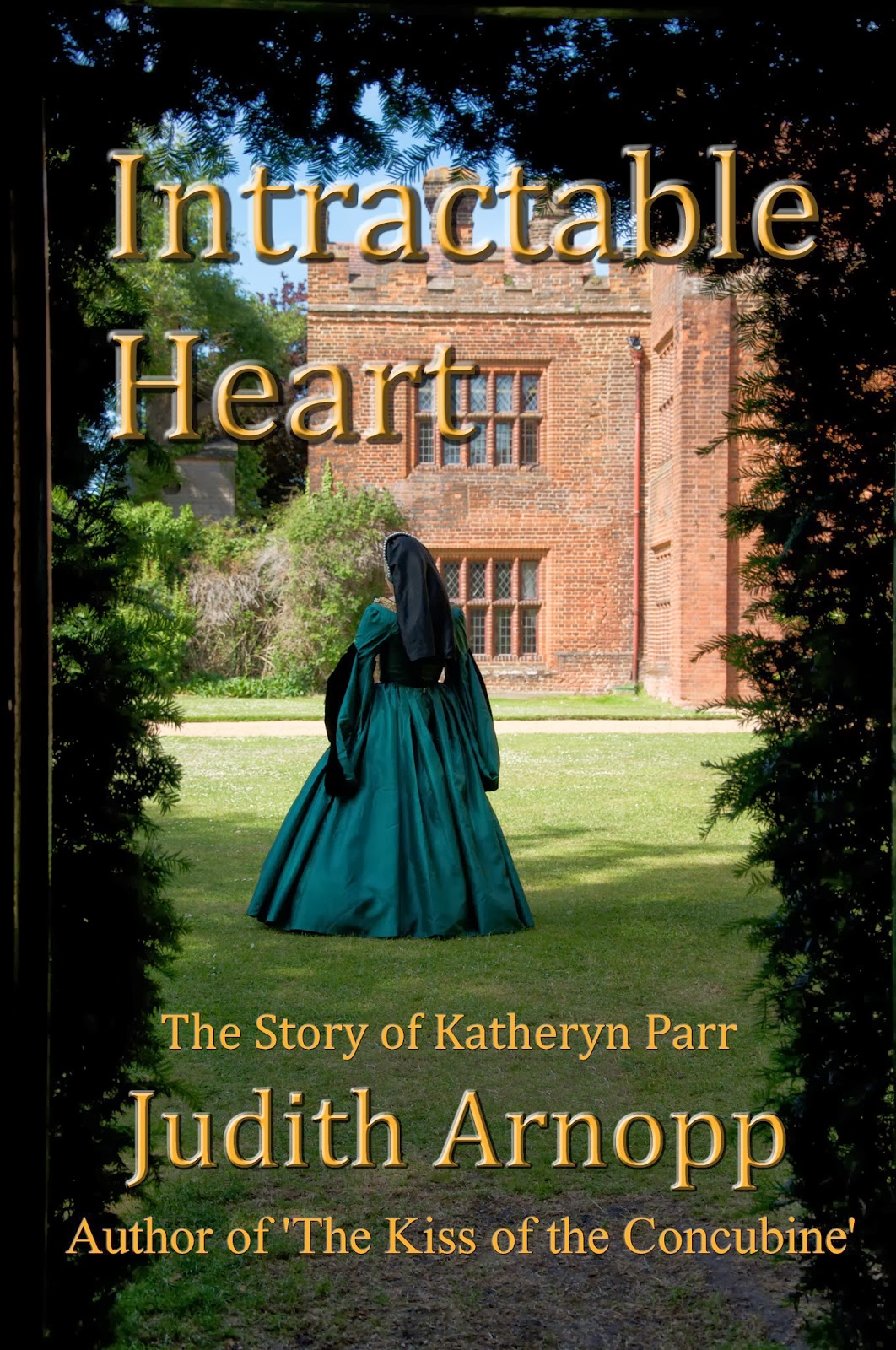 My last book The Kiss of the Concubine: a story of Anne Boleyn continues to sell well and attract lovely reviews and meanwhile I have been busy working on my next one. Intractable Heart tells the story of Katheryn Parr, Henry VIII’s last wife. She has often been regarded as rather dull; a nursemaid to three elderly husbands before falling for the charms of Thomas Seymour.
But during the course of my studies I discovered an intelligent, capable woman who not only stood as regent during Henry’s ill-advised war with France, but one who also had a voice in the reformation of the church, and was the first English queen to become a published author.

Katheryn was the daughter of Thomas Parr and Maud Green. Her mother was in the household of Catherine of Aragon and it is believed named her daughter in the queen’s honour. Katheryn's first marriage was to Thomas Borough but he died quite soon leaving the twenty year old Katheryn a widow. Her second marriage, two years later, was to John Neville, third Baron Latimer of Snape Castle in Yorkshire. Latimer had two children, Margaret and John, and during the Pilgrimage of Grace Katheryn and the children were held at Snape under siege. It is at this point in Katheryn’s life that my novel Intractable Heart begins.

Widowed for the second time Katheryn forms an attachment for Thomas Seymour, brother of Henry VIII’s third queen, but before they can cement their relationship in marriage, Katheryn catches the eye of the elderly and ailing King.

Below is an excerpt from Intractable Heart for you to enjoy.

As we enter a hush settles on the room. I immediately spot Thomas lounging in the window seat watching his friend Sir Francis Bryan trying out the steps to a new dance with Lucy Somerset. After a moment Mary waves her hand and the company resume their former jollity. I summon a page to bring Mary a drink and prepare to settle beside her but she leans forward, grasps my wrist warmly.
“I wish to speak to Lady Basset. You go and make merry with the others, Katheryn. You may be a widow but you’re not dead yet.”
Our eyes meet. Like a child caught with her hand in a bowl of sweetmeats, I feel my face grow hot beneath her eloquent smile. She knows. But she says nothing. When she turns away I begin to circumnavigate the room, slowly inching my way closer to Thomas’ side.
He turns, as if he hasn’t already noticed my presence, his face breaking into smiles. “Lady Latimer.” He kisses my mouth, grasps my hand and begins to talk of everyday things. Somehow I try to behave as if the world is not dipping and swaying about me. Before he moves on he whispers in my ear, discretely reconfirming our assignation in the garden and I promise to be there.
We part, for now and the rest of the afternoon passes in an endless round of other people’s enjoyment, other people’s merriment. And all the time I am watching and tracking the sun as it journeys west outside the window.
At last my duties are done. I pause in the corridor, wondering whether I should run upstairs to check on Margaret or leave her sleeping for a short while longer. Thomas has the greater pull and I hurry toward the garden, down twisting stairs, along torch-lit corridors, my heart leaping like a rabbit in my chest.
The outer door is lit up with sunshine, casting the inner hall into almost pitch darkness. As I grow closer I can see outside to where Thomas is lurking near the entrance to the knot garden. He has removed his cloak and draped it over his shoulder. I pick up my skirts and increase my pace. He sees me coming, lifts his hand in greeting, the effect of his smile pours like warm honey over my shoulders. I laugh aloud, about to dash forward but a figure looms from the darkness, obliterating the sun.
“Lady Latimer. Well, this is well met.”
I fall to my knees before the king. The stench of his festering leg fills my head. I look at his shoes, his bulging feet pushing the velvet out of shape, his vast calves encased in tight white hose. His hand is gentle on my shoulder. “Get up, get up,” he says. “Walk with me. Let us take a turn about the garden.”
What can I say? What can I do? I rise, smile as widely as I can manage, and lay my hand on his proffered arm.
I blink in the sudden sunlight as we make halting progress. He leans heavily on my shoulder, overpowering me with his presence. “Good afternoon, Thomas.” Henry pauses, waves his stick in the air in greeting as we draw close to my love. Somehow Thomas manages to execute a perfect bow as, with my heart full of disappointed tears, the king and I walk by.
I can feel Thomas’ eyes follow me all the way around the garden. He is still watching when we pause at the fountain where water cascades, the drops dancing with the evening light on the surface. Deep in the depths, among weed and slime, fishes are undulating. The king takes my hand, raises it to his mouth and kisses my fingers, and while he is distracted I send Thomas a pulsing glance of regret.
“I am glad I bumped into you,” the king is saying. “I would like to challenge you to another game of chess. You play so well. Quite remarkable in a woman…” His voice fades away as I watch Thomas quietly slip between the yew hedges that flank the path. I give myself a little shake.
“Yes, Your majesty. Of course, that will be my pleasure.” 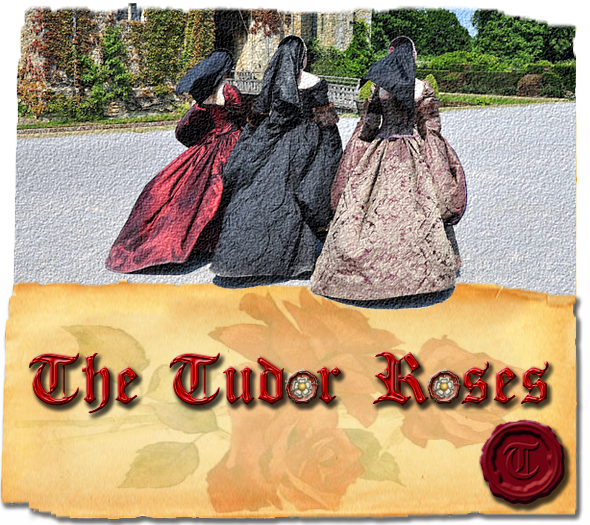 For the production of this book I am working with Darren Wilkins of The Tudor Roses fame. He is the responsible for the cover image which I fell in love with the moment I saw it. I am a great admirer of Darren's photography and hope that our work will complement each other again in the future. You can find The Tudor Roses here and also on Facebook

Intractable Heart will be available toward the end of the summer. In the meantime there are five other books in my collection for you to enjoy.

The Kiss of the Concubine tells the story of Anne Boleyn from her own perspective, treading her path from the time of her return from France to the day she ascends the scaffold steps to face her death.
Amazon UK
Amazon US

The Winchester Goose is told from the perspective of a prostitute from Southwark, contrasting the glories of the royal court of Henry VIII with the offal strewn streets of the stews.
Amazon UK
Amazon US

The Song of Heledd is the story of princesses, Heledd and Ffreur, a catalogue of bad decisions and disasters leads to the downfall of the royal dynasty of Pengwern.
Amazon UK
Amazon US

The Forest Dwellers is set after the Norman conquest and traces the lives of Aelf and Alys as they battle for survival beneath the new regime.
Amazon UK
Amazon US

Peaceweaver is the story of EAdgyth, wife of Gruffydd ap Llewelyn of Wales and Queen to Harold II of England. Her tale leads us from her first marriage in 1057 to the Battle of Hastings in 1066.
Amazon UK
Amazon US
Posted by Judith Arnopp at 06:35 2 comments: