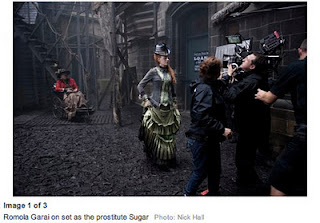 The mid nineteenth century is within touching distances of all of us; just a couple of generations divide us and, until relatively recently, the popular notion of Victorian society has been as a morally upright, God fearing, a sexually sanitised world. Upper class women were something to be revered. Their chastity paramount, they remained largely uninformed both about human reproduction or the workings of their own bodies. Gentlemen, entertained by these ladies, perched upon spindly chairs, sipping tea from porcelain in pretty parlours, discussing topics only fitting for a lady’s ears. It was a perfect world, set apart from squalor and peopled by the genteel.

This projected image was a false one. The Victorian desire to be seen as incorruptible was a smoke screen, concealing something very different. Just as they pushed their women into corsets that entirely distorted the feminine shape, swathed their tables in thick chenille cloths and stuffed their parlours with nick-nacks to confuse and confound the eye, so did they obscure the truth of what it really meant to be a Victorian.

In their attempt to sanitise their world the Victorians introduced, among other reforms, The Obscene Publications Act of 1864. Previous to this date no distinction made between suitable and unsuitable material and pornography was available alongside other literary works. Not much pre-Victorian pornography survives today, probably because it was then, as it is now, a throwaway item very much like a cheap novel you might discard on the train.

In trying to eradicate pornography they created the very thing they were attempting to destroy. The Obscene Publications Act drove the trade underground and, in their attempt to stamp out what they regarded as inappropriate literature, the Victorians not only invented the genre of pornography itself but preserved it for posterity.

The criminal court records of the day provide fascinating reading, opening a window onto the darker side of the Victorian garden. The records and other surviving erotica, when utilised as historical evidence, throw some deeply disturbing truths onto Victoria’s proud England that include sodomy, flogging and sexual child abuse. The preservation of the chastity of upper class women came at the expense of her less fortunate, working class sisters.

This material is not for the faint hearted. Even to a modern day reader, they are strong, no-holds barred accounts and, in a world familiar with squeaky-clean images of pure Victorian childhood innocence, it is deeply disturbing. The erotica of the day makes it clear that there were prostitutes on every street corner, their average age disturbingly young. At nightfall the London parks were reputedly alive with fornicating couples, in some areas one in seven houses was a brothel or a house where rooms for sex could be hired. The estimated number of prostitutes in London varies from around 6,000 to 80,000 but most agree it equated to around one prostitute for every seven men.

So, who were the men so bent on purchasing all this illicit sex? It wasn’t, as you might think, low life villains or law breakers, it was the middle and upper classes. In venting their sexual appetites on prostitutes they were able to preserve the chastity of their own women and, those same gentlemen that earlier in the afternoon had taken tea in a lady’s parlour, after dark sought the more basic services of the working girls.

There are many surviving records, court records as I mentioned before, pamphlets etc but perhaps the most useful book is Walter, My Secret Life. This takes the form of a personal diary penned by the pseudonymous Walter, a gentleman of independent means. There is some question as to the truth behind the claim that the text was discovered among the papers of a deceased gentleman and published posthumously. The tale of a secret diary kept hidden for years and then rediscovered after his death not only provides a suitable disguise for the author but also adds a fillip to the already stimulated curiosity of the prospective reader.

My Secret Life chronicles the sexual experiences of one man and amounts to an impressive eleven volumes, although only a fragment of this is in publication today. The author was determined to experience every sexual deviance imaginable and catalogue them for posterity. We learn a lot from Walter. His frustration when women’s drawers were invented, hindering his exploration up the skirts of almost any available female borders on comical.

Read alone, the book can be mistaken for fantasy, some of the events are not only improbable but make for squeamish reading. But pornography illustrates in graphic detail what the mainstream authors of the day were forced to omit. When read alongside Dickens or Wilde, My Secret Life helps us begin to understand just what life was really like for the prostitute, Nancy from Oliver Twist and it makes clear the nature of the exploits that caused Dorian’s Grey’s portrait to be so horribly corrupted. Most authors like to illustrate the world around them but the respectable authors of Victorian England could only hint at what lay beneath the projected polished veneer their society. But, for Walter, writing for himself, there were no boundaries.

So, who were these prostitutes? The majority were lower class women; glove makers trying to feed their children, factory workers lured from the back breaking world of the factory floor by the comparative good wages and less soul destroying hours of prostitution.

STDs were rife and the widespread belief in the myth that sleeping with a virgin could cure syphilis saw an increase in the demand for young girls. As a consequence some were sold as children into the sex trade and the resulting spread of disease is horrible to contemplate. Illicit literature of the mid nineteenth century reveals a world where virginity could be purchased for few pennies or a prostitute could be subjected to acts that could not possibly be inflicted on a respectable lady. Many young women, as countless novels assure us, were taken down and ruined by some careless upper class male, outcast from society and unable to find another way. Prostitutes were ordinary women; daughters, wives, mothers; the lucky ones managed to find other work or marry and return to an honest life, others didn’t. There are records of suicides, death from STD’s, and as we are all aware, from personal assault or murdered at the hands of men like Jack the Ripper.

Although toward the end of the period strenuous efforts of reform were undertaken, most ‘respectable’ Victorians turned away from it, preferring to pretend that such atrocities were not happening under their noses. It was not part of the Victorian’s ‘official’ consciousness.

Illustrations: copyright BBC. From the series The Crimson Petal and the White