The King, The Archbishop, and a Bear 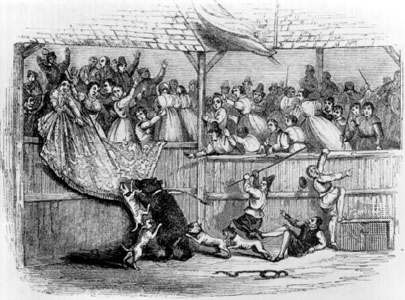 Bishop Burnet, writing a century after the event, relates a bizarre incident that took place in Henry VIII’s reign during the aftermath of the six articles. The Six Articles was an act that set out quite clearly and reinforced six points of medieval doctrine which Protestants at that time had begun to undermine. The act also specified the punishments due to those who did not accept them and was known by many protestants as ‘the bloody whip with six strings.’ As a married man, Archbishop Cranmer must have taken particular exception to Article Three which stated that priests should not be allowed to marry.

He set down his objections quite strongly, making detailed notes, all backed up with citations from the bible and learned scholars, and it is believed he planned to present his findings to Henry.  His secretary, Ralph Morice, duly copied the notes into a small book and set off with it to Westminster.

The king, meanwhile, was attending a bear-baiting across the river at Southwark and, just as Ralph Morice and company were passing in a wherry, the bear broke loose from the pit and with the dogs in hot pursuit, leapt into the river and made straight for the boat. Bishop Burnet goes on to relate that; 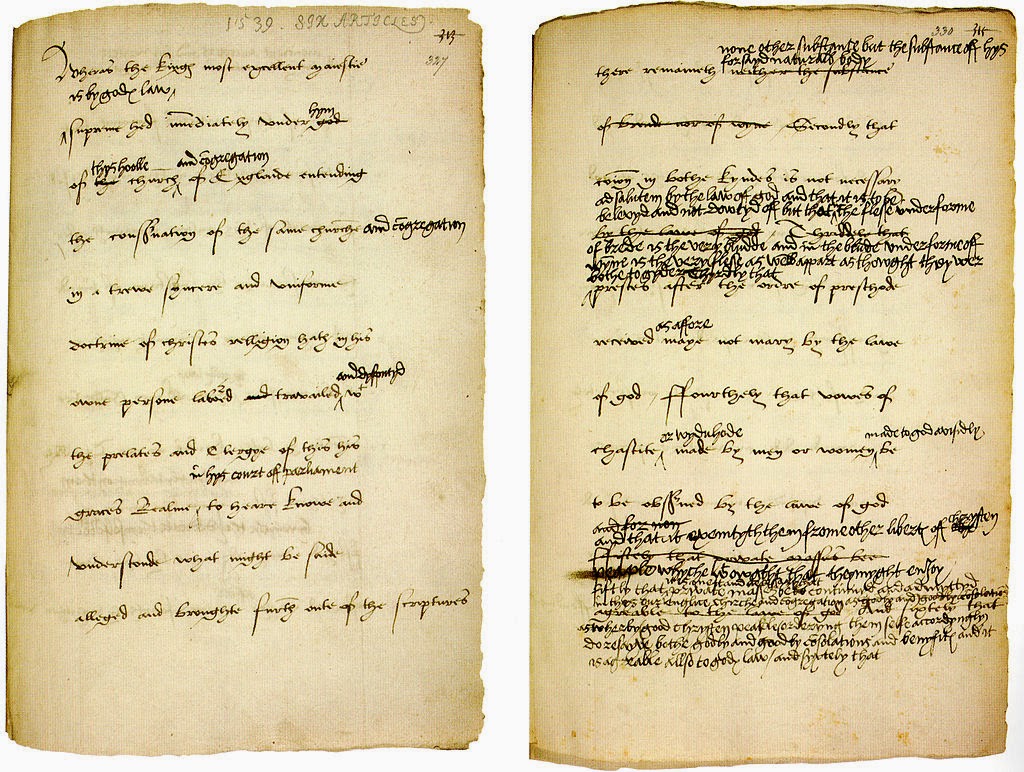 ‘Those that were in the boat leaped out and left the poor secretary alone there. But the bear got into the boat, with the dogs about her, and sank it. The secretary, apprehending his life was in danger, did not mind his book, which he lost in the water.’

When Morice reached the shore he saw his book floating and asked the bearward (who was not perhaps as ‘in charge’ of the bear as one might hope) to retrieve it for him. But before he could get hold of it, the book fell into the hands of a priest who, realising what the book contained, declared that whoever claimed it would be hanged.

Burnet says that, ‘This made the bearward more intractable for he was a spiteful papist and hated the archbishop, so no offers or entreaties could prevail on him to give it back.’
In no little panic Morice sought the immediate assistance of Cromwell who, on discovering the bearward about to hand the book over to Cranmer’s enemies, confiscated it, threatening him severely for meddling with the book of the privy councillor. Thus saving the life of the Archbishop.

This all sounds rather like a scene from  a farce, far too unlikely to be true. I cannot help but wonder what Henry made of the spectacle. I was so struck by the scene that I couldn't resist including it in The Winchester Goose, a short excerpt of which follows. Joanie Toogood, a prostitute from Southwark visits the bear-baiting where Henry VIII is watching with his new queen Katherine Howard.


“Come, come with us.'Twill be a lark.” Peter’s laughter pulls me back from me thoughts and I reluctantly let him lead me from the bear pit, knowing that he will want to use me later. Oh well, he has an ample purse and it may save me the chore of turning out for punters after dark.
As we near the river’s edge a great cry goes up from the crowd and we turn, craning our necks to see what all the fuss is. To our amazement, those gathered at the pit are scattering, men, women and childer fleeing, wide eyed, half laughing, half afraid, their great shrieks tearing the air while the tormented bear, who has broke free of his chains, comes lumbering after.
The dogs are still following, baying and yelping as they snatch at his bloodied fur with their lathered jaws. Women snatch their bairns into their arms and hide in doorways as in a great, snarling, madcap parade, they pass close to us. Peter the Costermonger gallantly pushes me behind him and I cling to his goose-turd green jerkin to peer over his shoulder, watching in astonishment as the bear lumbers past and casts itself, with a great splash, into the stinking river, the yelping dogs not hesitating to follow after.
With wild hoots of laughter the crowd rush to the bank where the sudden appearance of the bear and his savage train are causing a deal of trouble on the water.
Several passing barges are thrown into disarray, rocking wildly in the murky waves. I see a man standing in the prow of an abandoned wherry, the other occupants having leapt into the water. With flailing arms they struggle for the shore. I nudge Peter in the ribs as the dripping bear clambers onto the side of the barge, over-tipping it, dragging it down so that it begins to fill with water, throwing the hapless cleric into the drink. The air around us is filled with screeching laughter.
Peter’s arm is tight about my waist and, with the sharp edge of the balustrade digging into my ribs and the sun warm upon my back, I open my mouth to bellow insults at the struggling man who, with his books and parchments floating rapidly downstream, cannot decide which is the greater danger, the bear or the water.
He is a sorry sight, his robes streaming water, his hat lost, his face turning blue with cold. The onlookers roar with merriment as he wades up the bank, sits on the mud and begins to empty his shoes of water. Then, on seeing the bearward preparing to lure his charge home, he gestures to his treasures that are threatening to sink beneath the waves. The fellow runs obligingly along the water’s edge to fish them out with his stave and dump them some way up the river bank.
The spectacle has raised my spirits and, in a better mood now, I follow Peter across the bridge. The hand on my waist may not be the one I long for, but Peter is a merry lad and will warm me for a while and help to keep a roof over my head.
I can be content with that for now. 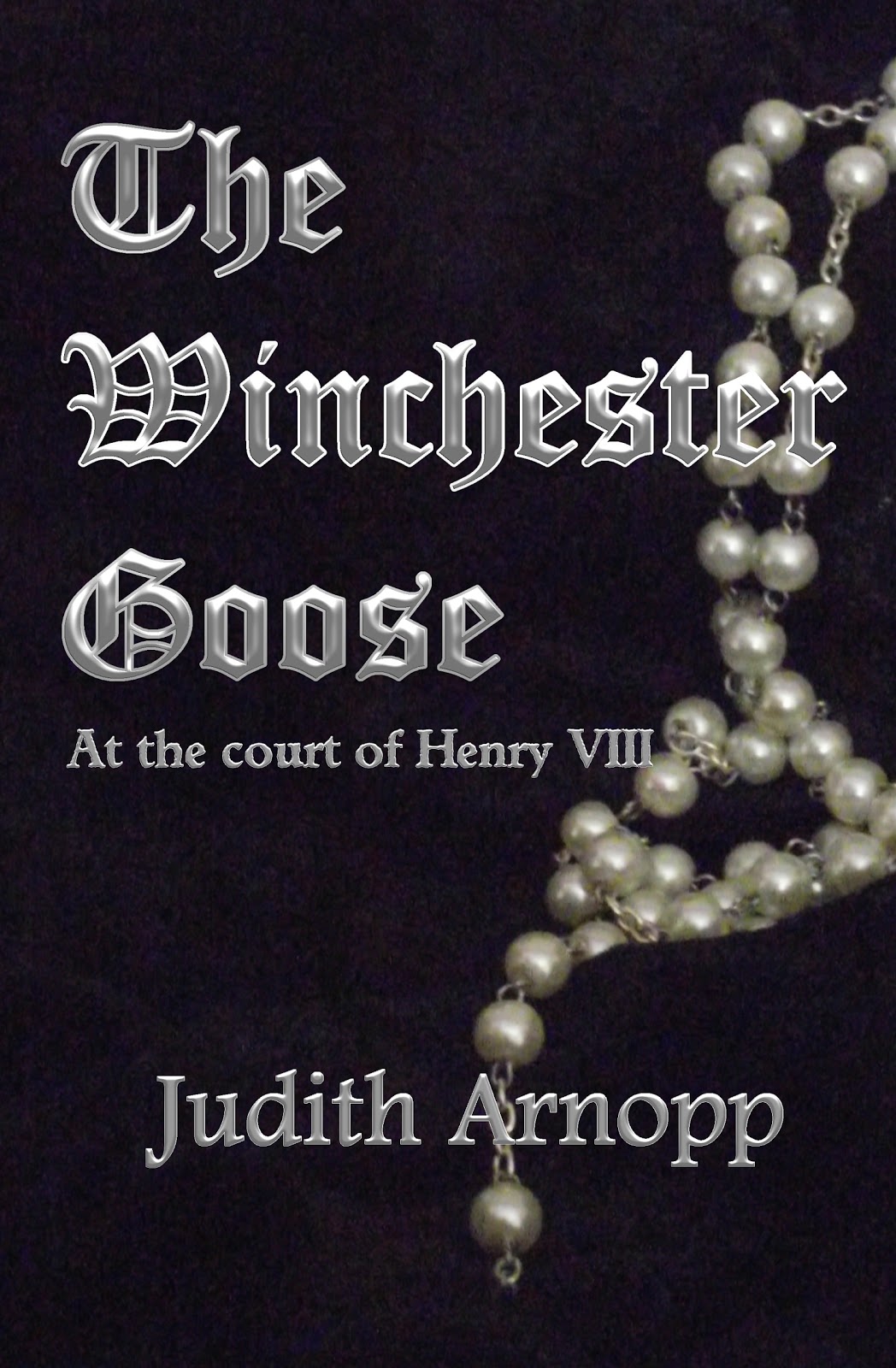 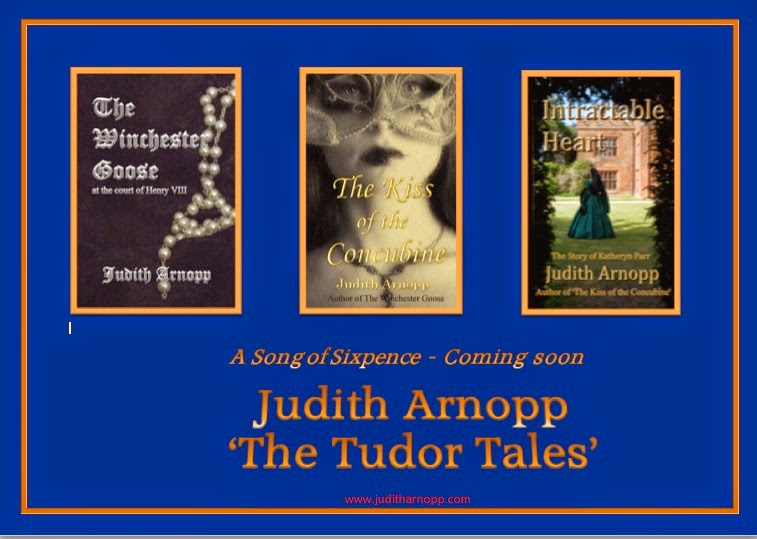