The Portraits of Lady Margaret Beaufort

Most of us are familiar with the portraits of Margaret Beaufort. Invariably she is depicted toward the end of her life, elderly, austere, and pious. It is difficult to imagine this staid, nun-like woman as a gurgling baby or a naughty child; even less as a vigorous, ambitious young woman. But people, even Countesses, are not born pious. Her face must once have been unlined, she may have been frivolous, perhaps even reckless. She was certainly determined. Her crusade to secure her son Henry VII on the English throne involved considerable risk to herself as she intrigued against a reigning monarch.

Against all odds, she financed her son’s campaign and in doing so ended her son's exile and changed her life forever by forging the new Tudor dynasty. With Henry’s accession to the throne she became the most powerful woman in the realm, and she did not waste her new-found success but became one of the king's chief advisers. Her charitable work included the founding of hospitals and universities, and championing the arts. She was educated, intelligent and indomitable. A woman to be celebrated, you might think, yet she is invariably depicted in both history and fiction, as ... well, a bit of a harridan.

This, I think, is largely due to our difficulty of viewing her in a softer, more human, light. Her portraits are not endearing to the modern eye. She is not pretty, she is not fabulously attired but that was the intention. The paintings we see today form part of the propaganda supporting the Tudor rule, presenting Margaret as the founding mother of the new dynasty; a figure of unblemished character. Without exception, the portraits depict her in her later years, clothed in a peaked white headdress, usually with a book, and always in the act of religious contemplation. She has an aura of chastity and charity.

Of course, portraits are not always about the subject’s appearance but, instead depict a person’s character rather than how long the sitter’s nose may have been. Once she had achieved her exulted position as the king's mother the perils of Margaret's youth became immaterial. What mattered to the newly-formed Tudor dynasty was the projection of an authoritative, reverent persona - a spotless nun-like figure. There is no hint of the young woman who was wed as a child to Henry VI's brother, bore her son when she was just thirteen years old. The fears and uncertainties, the passions and the flaws that she experienced were in the past, and the vital role she had once played was now unimportant to the Tudors.

There are no extant portraits of Margaret from her lifetime, the ones we see today were made during the reigns of Henry VIII and Elizabeth I. Undoubtedly, they are copies of a lost original so, particularly if we compare them to the effigy on her tomb at Westminster, we can be fairly sure of her appearance during the later years of her life. Her resemblance to her son is clear.

The portrait above (fig two) of Margaret is believed to have been part of a set of corridor portraits including Henry VII, Henry VIII, commissioned during the reign of her great granddaughter, Elizabeth I. Again, Margaret is in a religious pose, her clothing and book of hours illustrating her religious devotion. It is the best preserved portrait we have of Margaret, the detail of the golden arch beneath which she sits, and the ornamented cloth of state is still brightly defined.

My personal favourite portrait of Lady Margaret (fig four) hangs in St John’s College in Cambridge. It was painted by Rowland Lockey in the 16th century. Margaret is shown at prayer in a lavish apartment, presumably her private chamber. She kneels at a desk with a heavy embroidered cloth and before her is a prayer book, a sign of piety and learning, and beneath it the ‘chemise’ cover she kept it wrapped in. Above her head, a tester bears the Tudor rose. The chamber itself is sumptuous, testament to her love of comfort, the stained glass windows bears the badge of the Beaufort family and (just out of shot) the arms of England.

This portrait tells us more about her lifestyle than the others. We can see that, despite her sombre attitude, she lived luxuriously, as one would expect. Her dark clothes, although quite dour to our modern eyes, were of the best quality, black being among the most expensive and difficult hues to produce. Margaret, it seems, had a great love of clothes.

After her death ‘seven gowns of black velvet were found, trimmed with ermine, and a mantle of tawny.’ And, most interesting of all, was ‘a scarlet gown with a long train, ornamented with the badges of the Garter and evidently to be worn on St George’s day. In another inventory we find a crimson gown to be worn with her ‘circuit’, not a diadem but a surcoat, such as she had worn at Christmas 1487.’[1]

So, a new Margaret begins to peek from behind her ageing portraits, a younger woman who favoured scarlet and ermine, whose ‘chariot men wore scarlet. The very buttons of the horse harness were of gold of Venice.[2]’ This speaks less of piety and very much of majesty, perhaps even a little vanity.

The National Portrait Gallery has a portrait (fig five) previously thought to be Margaret but now largely dismissed. It features a younger woman in a pose now expected of Margaret. Her hands are clasped in pious prayer, her head is covered with a veil. The painting is dark but the gown appears to be dark red or burgundy, the veil itself is lavishly embroidered. The nose is long and heavy, the eyes heavily lidded, as Margaret is shown in other portraits, and the face is pensive. At first glance, her expression seems gentle, yet on closer inspection it becomes more determined. and the viewer begins to debate whether the sitter is lost in religious adoration, or distracted by plots of rebellion. It is difficult to judge.

As I stated earlier, the portrait is no longer believed to represent Margaret but it is intriguing none the less, and in the absence of representations of the younger woman, I used it during my research for The Beaufort Chronicles to help me picture the young woman who, widowed three times, separated from her only son, and exiled from the Yorkist court, had no notion of the triumphs her future held.

The Beaufort Chronicles is now available on Amazon Kindle, Paperback and Audiobook. Click on this link for further information: mybook.to/TBwoman 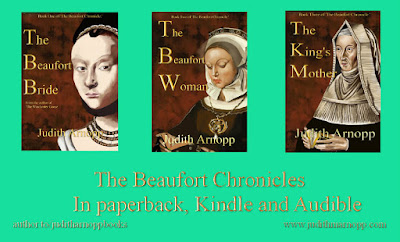