The Death of Henry VIII and something to mark it. 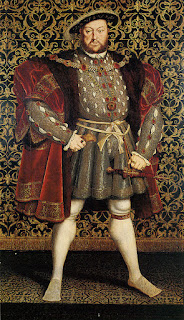 Today, January 28th, marks the anniversary of the death of our most unforgettable monarch. Henry VIII, love him or loathe him, changed England and the way we live forever. In life he was a king to be feared, a ruler never to be crossed, a man not to be questioned.  But, in 1547,  the inexorable hand of Death, changed all that. King Henry became mortal and his mind and actions, from that day to this, has been open to interpretation. Strip away the sumptuous trappings of kingship and we are left with a psyche that even today, evades conclusive analysis.

My next novel, The Kiss of the Concubine, opens at Henry's deathbed and to commemorate his passing I am treating you to a snippet.

It is almost midnight and January has Whitehall Palace clenched in its wintery fist. The gardens are rimed with frost, the casements glazed with ice. Like a shadow, I wait alone by the window in the silver-blue moonlight, my eye fixed on the bed. The room is crowded, yet nobody speaks.

I tread softly among them.  The flickering torch-light illuminates a sheen of anticipation on their faces, the rank odour of their uncertainty rising in a suffocating fug. Few can remember the time that went before, and both friend and foe balance upon the cusp of change and tremble at the terror of the unknown.

I move through heavily perfumed air, brush aside jewelled velvet sleeves. At the high-canopied bed I sink to my knees and observe his face for a long moment. He is changed. This is not the man I used to know.

They have propped him on pillows, the vast belly mountainous beneath the counterpane. The yellow skin of mortality’s mask is drawn tightly across his cheeks. There is not much time and before death can wipe his memory clean, I speak suddenly into his ear, a whisper meant only for him.
“Henry!”
The king’s eyes fly open and his eyeballs swivel from side to side, his disintegrating ego peering as if through the slits in a mummer’s mask. He knows me, and understands why I have come.

His whimper is that of a child left alone in the dark. Anthony Denny steps forward and leans over the bed. ‘Your Majesty, Archbishop Cranmer has been summoned; he cannot be long now.’
Henry’s fat fingers tremble as he grips the coverlet, his pale lips coated with spittle as he tries to speak. I move closer, my face almost touching his, and the last rancid dregs of his breath engulf me. “They think that you fear death, Henry. But it is me you fear me more, isn’t it, my lord?”
“Anne?”

The sound is unintelligible, both a denial and a greeting but it tells me what I need to know. He recognises and fears my presence. Those assembled begin to mutter that the king is raving, talking with shadows.

I sink into the mattress beside him and curl my body around his bulk and run my fingers across the coverlet. “How many times did we share this bed, Henry?” His breathing is laboured now and sweat drips from his brow, the stench of his fear exceeded only by that of his festering thigh. I tighten my grip upon him.
“Did you ever love me, Henry? Oh, I know that you lusted but that isn’t the same. Do you remember how you burned for me?”
I reach out to trace my fingertip along his cheek and he leaps in fright, like a great fish floundering on a line, caught in a net of his own devising. One brave attendant steps forward to mop the King’s brow and pull up the covers as I continue to tease.
“Poor Henry. Are you afraid even now of what you did? To win me you broke from Rome, although in your heart you never wanted to. Even the destruction of a thousand years of worship was a small price to pay to have me in your bed, wasn’t it?”

Henry sucks in air and forgets to breathe again. A physician hurries forward, pushes the attendant aside and with great daring, lifts the king’s right eyelid. Henry jerks his head away and the doctor snatches back his hand as if it has been scalded.

Even now they are fearful of him. Although the king can no longer so much as raise his head from his pillow, they still cower. How long will it take for them to forget their fear?

Deeply apologetic, the physician bows and backs away to take his place with the others. As they watch and wait a little longer the sound of mumbled prayer increases. “Not long now, Henry.” I whisper like a lover. “It is almost over.”

A door opens and Archbishop Cranmer enters, stamping his feet to dislodge the snow from his boots. He hands his outer clothes to a servant before pushing through the crowd to approach the bed, his bible tucked beneath his arm.

Playfully, I poke the end of Henry’s nose. “Time to confess your sins, my husband.” Cranmer takes the king’s hand, his long slim fingers contrasting with the short swollen digits of his monarch. As he begins to mutter the last rites I put my mouth close to Henry’s ear to taunt him.  “Tell the truth, Hal. Own up to all the lies you told of me; how you murdered and how you cheated. Go on…”

But King Henry has lost the power of speech, and cannot make a full confession. Gasping for one more breath he clings tightly to Cranmer’s hand and I know there is not long to wait before he is mine again. A single tear trickles from the corner of his eye to be lost upon his pillow.

“It’s time, Henry.” I whisper. “And I am here, waiting. For a few short years I was your Heaven upon Earth and now, perhaps I can be so again. Unless, of course, I should choose to become your Hell.”

The Kiss of the Concubine is a work in progress and, all being well, should be available by the beginning of 2014. In the meantime you might like my other books.

The Song of Heledd: http://www.amazon.co.uk/The-Song-of-Heledd-ebook/dp/B007HZZ1HI/ref=pd_sim_kinc_2